SANTO DOMINGO, Dominican Republic – Progress is being made in the construction of a border fence between the Dominican Republic and Haiti This is according to  Minister of Defense, Lieutenant General Carlos Luciano Díaz Morfa, who has been supervising the progress of work the work being done. 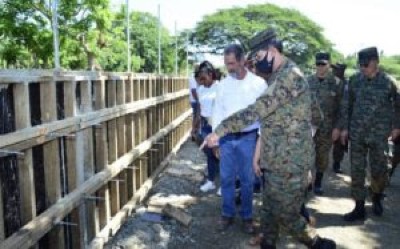 Following a recent tour of the site, Díaz Morfa, said that the programmed activities are proceeding at the planned pace, and the work is advancing.

“The fence will benefit both countries because it will allow more efficiency in the control of the migratory flow, in the fight against cattle theft and other illicit activities, such as drug trafficking, the illegal sale of arms, and the protection of agricultural producers, strengthening the current protection schemes of the border area,” said Diaz Morfa.

The head of the Ministry of Defense assured that houses will be built to be delivered to those who need to be displaced from their current residences to make way for the fence.

In the supervision of the project and in the exchanges with the owners of the houses and the lands that will be declared of public utility, the minister spoke with the landowners of the lands located in some areas where construction is underway.

He also thanked them for their willingness to collaborate with the construction of the fence and assured them that the Government would compensate all legitimate owners.

Earlier this year, construction started on the concrete barrier that will span nearly half of the 244-mile border between the two countries, that share the island of Hispaniola.

Officials in the Dominican Republic claim that the wall will reduce flows of migrants, drugs, weapons and contraband.

“The benefit for both nations will be of great importance,” said the Dominican president, Luis Abinader, in a statement made earlier this year at a ground-breaking ceremony in the border town of Dajabón.

While the two countries that make up the island of Hispaniola are close geographically, their differences are stark.

The Dominican Republic, with a population of 10.8 million, is a booming tourist destination with year-round visitors to its resorts and golf courses.

On the other hand, Haiti, with a population of 11.4 million, is the western hemisphere’s poorest country, riddled with crime and mired in political and economic crisis.