Prime Minister Gonsalves Hospitalized After Being Hit During Protest

KINGSTOWN, St. Vincent – Prime Minister Dr. Ralph Gonsalves remained hospitalized on Thursday night after he was struck with an object during protest earlier during the day as supporters of the main opposition New Democratic Party (NDP) and two public sector unions took to the streets to condemn proposed changes to the Public Health Act. 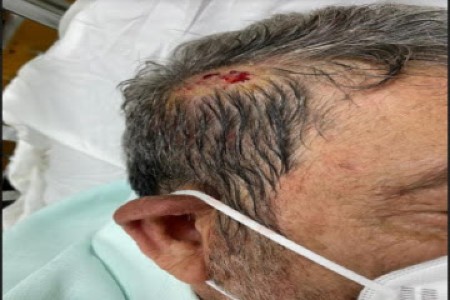 The injury sustained by Prime Minister Dr. Ralph Gonsalves during the protest on Thursday outside ParliamentThe government has said the amendment to the legislation would allow for the vaccination of public sector workers, considered to be front line workers.

The government is proposing to remove the word “voluntary” from a section of the law that speaks to vaccination against an illness that has triggered the declaration of a public health emergency — as is the case with the coronavirus (COVID-19) pandemic.

In a statement, the Office of the Prime Minister said that Gonsalves, 74, is now recuperating under the care of hospital staff.

“He will remain at the Hospital overnight for observation. He has informed his colleagues that his is recovering, and reaffirmed that no lawless mob will prevent him from doing the people’s business in the seat of our democracy,” the statement said.

It added that Gonsalves “strongly reiterated his belief in the solemnity of the vote as a cornerstone of parliamentary democracy and basis of governmental legitimacy.

“Moreover, the use of violence in pursuit of political purposes is entirely unacceptable. We expect that the perpetrator of the actual act of violence will be brought to justice,” the statement said, adding “such an act is to be unequivocally condemned.

“Equally to be condemned are the instigators and back-room authors of this kind of violence,” it noted.

In a brief statement, the Opposition Leader and NDP president, Dr. Godwin Friday said he too “condemn the act of violence today against the Prime Minister Dr. Gonsalves and wish him a speedy recovery”.

In its statement, the NDP said that it strongly condemns violence in any form and condemns those responsible for the assault of Dr. Gonsalves, as well as the assault of a protester …”

It said that the protester “sustained a wound to his head when he was struck…by a police officer,” adding “we trust that perpetrators will be brought to justice”.

Earlier, Minister of Finance Camillo Gonsalves, who is also his son, told legislators that his father was left “bleeding” as a result of the incident, and condemned the act against the Prime Minister.

The Finance Minister further decried opposition lawmakers for not condemning the violence against Prime Minister Gonsalves.    As a result, there has been a stronger police presence near the Parliament building.

In the evening, some protesters celebrated the Prime Minister’s injury, beating drums and chanting, “The World Boss head buss!”

In its statement, the Office of the Prime Minister said Gonsalves, “duly elected Prime Minister…was physically assaulted and wounded by Opposition demonstrators while attempting to enter the House of Assembly.

It said “approximately 200 demonstrators, responding to a call to action from the Leader of the Opposition, picketed the Parliament and blocked the entrance to building.

“When the crowd prevented the vehicle carrying the Honorable Prime Minister from driving through the gate of the Parliament, he alighted the vehicle and attempted to enter on foot. An Opposition demonstrator then hurled a projectile at the Prime Minister, which struck him in the head, inches above the temple.”

The statement said that Gonsalves was bleeding profusely and taken to the Milton Cato Memorial Hospital by his security detail, where he was met by his wife.