ST. JOHN’S, Antigua –Trinidad and Tobago Prime Minister, Dr. Keith Rowley, Monday praised the regional integration movement, CARICOM, saying it has been a valuable organization to the security and prosperity of the Caribbean population. 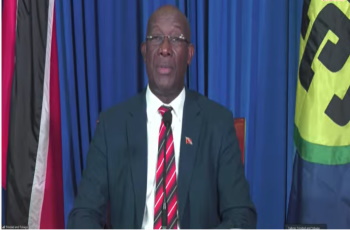 Trinidad and Tobago Prime Minister Dr. Keith Rowley addressing CARICOM Summit (CMC Photo)Addressing the 42nd meeting of Caribbean Community (CARICOM) leaders, Rowley, who served as chairman of the grouping for the past six months, said over the years, many have queried the role and relevance of CARICOM and the Single Market and Economy (CSME) that allows for the free movement of goods, skills, labor and services across the region.

“While we know how valuable this organization is to the security and prosperity of our region that does not always translate into the everyday discourse,” he said, noting that in dealing with the coronavirus (COVID-19) pandemic, “it would have been unimaginable for any one of us to face it alone.

“We have shared resources, expertise and support which have kept us ‘afloat’ in turbulent times. The CARICOM identity belongs to us all and, today, on CARICOM Day, 20 years since the signing of the Revised Treaty of Chaguaramas, I applaud the ‘I am CARICOM’ initiative which seeks to bridge that divide and facilitate more active participation by our citizenry,” Rowley said, adding “this will undoubtedly add threads to the fabric of our integration movement in the years to come”.

Rowley told the two-day virtual meeting that CARICOM has been heavily engaged during the last months and although there have been setbacks, there have also been some successes”

He said all of this would not have been possible without the “tireless efforts” of the outgoing CARICOM Secretary General, Irwin LaRocque and his staff.

“Thank you Secretary- General for the support provided to Trinidad and Tobago during the chairmanship by you and your team at the Secretariat, as well as, the Community Institutions, in particular CARPHA (Caribbean Public Health Agency) and CDEMA; (Caribbean Disaster Emergency Management Agency) and associate institution, The UWI (University of the West Indies) , through its Seismic Research Unit among others.  “

Rowley said that his tenure as chairman during “this tumultuous year” had been characterized by uncertainties on many fronts, from virus to vaccines to variants.

“Through it all, we have rallied and we now stand on somewhat firmer ground as a result of the coordination and collaboration among member states, associate members and our institutions,” he said, adding that in facing the pandemic frontally, “our early stance on equitable vaccine access, which we articulated early in January, anchored our region’s actions and continues to resonate globally, especially among developing countries”.

Rowley said that CARICOM had taken the decision that he would write to specific global leaders requesting vaccines from their surplus supplies.

“This clarion call, as well as strategic engagement and advocacy with high level office holders in key capitals and international institutions, have resulted in offers of vaccines from various channels.  This has put us closer to our goal to inoculate as many of our citizens as possible – to ensure that they are protected from evolving mutations of the virus and to enable us to return safely, and sooner, to bolstering livelihoods.

“I take this opportunity to thank my CARICOM colleagues who shared vaccines with Trinidad and Tobago and with other member states. Your gracious act of good neighborliness during what has been a challenging time is deeply and sincerely appreciated,” he said.

Rowley said that the solidarity that exists among Caribbean leaders, the respect, the caring, that spirit of Community, is not to be taken lightly and must be nurtured and lauded.

“In similar vein, I believe that the unequivocal, principled position we took in the smoldering dispute between Guyana and Venezuela, earlier this year, went a long way in bringing us to a place where the heat has abated.

“That spirit of Community was evident as well in the outpouring of support to our sister nation, St. Vincent and the Grenadines, following the eruptions of the La Soufrière Volcano, which also impacted Barbados, Saint Lucia and Grenada. Assistance has also been mobilized for Suriname following disastrous flooding events which, we hope, will not be repeated even as we remain concerned about the effects of global warming. “

He said that the already active hurricane season, however, is a stark reminder of the region’s vulnerability.

“It stresses the importance of continuing to engage the wider global Community and International Financial Institutions, on the peculiar circumstances adversely affecting our sustainable development including threats to our financial and socio-economic structures,” Rowley added.