HAMILTON, Bermuda, – Former Premier Dr Ewart Brown appeared in Supreme Court via video link on Thursday and had his bail extended, but he was not required to enter pleas on 13 charges of official corruption. 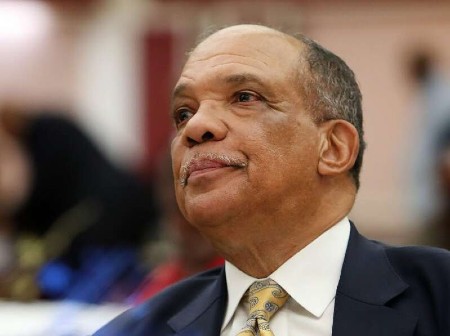 Former Premier Dr Ewart BrownBrown, 75, who led the country between 2006 and 2010 under the Progressive Labour Party (PLP), appeared on a large screen at the monthly arraignments session, after first being charged with the offences in January in Magistrates’ Court.

Brown was asked by Acting Puisne Judge Juan Wolffe if he could hear the proceedings and he confirmed he could.

His lawyer, Jerome Lynch, was in court for the hearing.

Brown’s whereabouts were not disclosed, but in January he appeared by video link from Florida.

Five of the charges Brown faces are related to agreements with the Lahey Clinic, in Massachusetts, through which he allegedly received US$4.01 million in monthly payments between 2001 and 2010.

The remaining eight charges relate to allegations of corruptly obtaining US$350,500 in donations to benefit the PLP and the Bermuda Health Foundation, between 2007 and 2010.

Justice Wolffe adjourned the matter for mention on May 3. Brown’s bail – in the sum of US$200,000 with one like surety – was extended until then.

Brown was named as a “non-party co-conspirator” in a 2017 lawsuit brought by the former One Bermuda Alliance government against the Lahey Clinic.

The legal action in Boston against Lahey Clinic alleged there was a conspiracy between the health provider and Brown to conduct excessive medical scans.

Both Brown and the Lahey Clinic denied the allegations.

The case was dismissed by Judge Indira Talwani of the US District Court in March 2018 because Bermuda had not shown that it suffered any injuries in the US.

But a police investigation at home into allegations of unnecessary medical scans in Bermuda continued.