PARAMARIBO, Suriname –Journalists who met with President Chandrikapersad Santokii, have described the weekend deliberations as “fruitful” several weeks after they had written to him expressing disappointment with the treatment of the media at government-initiated news conferences. 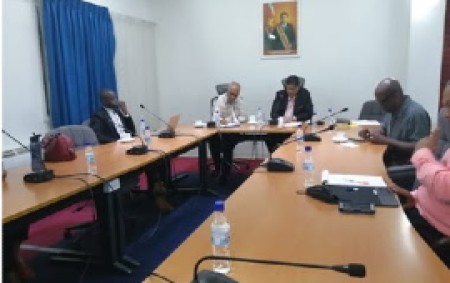 President Chandrikapersad Santokhi in conversation with the Media Collective (Photo credit: Media Collective)Veteran journalist, Ivan Cair, who was among journalists submitting the later in late October, had expressed the hope then that “the government takes good note of what is in that letter” and that it was “an urgent matter” to be acted upon.

he Surinamese Association of Journalists (SVJ) had said it was “in full support” of the journalists writing to the government and that it endorsed “everything in the letter” to the head of state.

The journalists complain that during news conferences called by the government, reporters are often not allow enough time to ask questions while government ministers give long introductions to answers.

They said that a press conference on October 4 was the straw that broke the camel’s back.

Following the meeting over the weekend, the journalists, known as the “Media Collective” said that various items outlined in the latter had been discussed.

They said President Santokhi promised that brief introductions will be held at press conferences, the question-answer system will be implemented and ministers will be more accessible to the media.

The meeting, which was also attended by Albert Ramdin, the Minister of Foreign Affairs, the Director of the Suriname Communications Service Alven Roosveld agreed that n the future, media houses will be sent a ‘fact sheet’ in advance, so that journalists can be better prepared for their assignments.

They said the recently held press meeting on the National Risk Assessment (NRA) was a test case in which there was no long introduction and the question-answer system was used.

For the accreditation of media houses and journalists, there will be a working group with representatives from the government, the Media Collective, the Surinamese Association of Journalists and the media houses that will work on drawing up the rules and conditions that will apply to accreditation.

They quoted Santokhi as saying that he believes it is important that communication is improved and that there are many positive things being done by this government that are not reported in the media because the government itself falls short with regards to information.

The meeting heard that a media strategy will be implemented from January 1, next year, with the aim of improving communication from the government to the media and society.