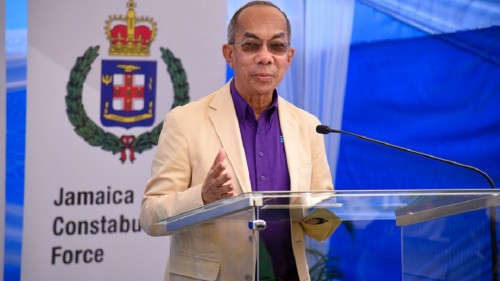 National Security Minister Dr. Horace Chang (Image via Twitter)Chang, speaking at a ground-breaking ceremony for a new police station in Frome, Westmoreland, the westernmost parish on the island, said that the proceeds from lottery scamming activities are fueling the violence in Jamaica.

But he told the ceremony that law enforcement agencies here are determined to dismantle the illegal networks and that 21 so-called lottery scammers were extradited to the US last year.

“And there’s more to come. I can say that with confidence. In addition to that we have people who import because of scamming, but I know the police….are monitoring dozens of them out there and we going to find them, lock them up,” he added.

The operations to arrest these individuals were conducted by the Joint Operations Linked to Telemarketing (JOLT) Task Force, which includes the police, Major Organised Crime and Anti-Corruption Agency (MOCA), Financial Investigations Division (FID) as well as US investigators.

Chang said that 52 people are now before the court on charges related to scamming, and a number of lottery scamming networks are being monitored by local law enforcement, so it is only a matter of time before investigators “find them, catch them and lock them up”.

In his address, the meantime, the National Security Minister told members of the security forces that they should take a zero tolerance approach in defending themselves from armed thugs who confront them.

“Anytime a man take up a gun after police…when him fire him mustn’t miss. And when him get hurt, him get hurt. Once him pull a gun on a police officer, him must be prepared to deal with it,” said the minister, who further quipped that he preferred if the criminal does not then need medical care since that will cost the state “$10 million” to save his life.

He urged criminals to instead surrender when approached by the police, adding that “they are entitled to a fair trial”.

Chang also claimed that 32 alleged gang members who are out on bail are behind a number of murders in Westmoreland, adding that light sentences embolden convicted criminals.

“There are not only several known criminals on the road right now who are out on bail killing people, [but] there are others who have been to jail, found guilty. After the police investigate, prosecute and charge they are found guilty and they are out very soon. In fact, they are now prepared to kill more because they now feel that they can go through the system and have no fear of apprehension or prosecution. And there are several of those around,” he said.

Following the ceremony, Chang told reporters that “a particular individual became famous for making eight bail applications, could have been [facing] six or seven charges for murders.

“One of his bail guarantors was killed at one stage. On this occasion, he’s still behind bars… This is a reflection of some of the problems we have,” he said.

The National Security Minister said the proposed Firearms (Prohibition, Restriction and Regulation) Act could be a solution to the problem even as there have been concerns raised about some aspects of the legislation.

But, Dr Chang told reporters he firmly believes the legislation is an appropriate response to what now obtains in the country.

The Act is expected to be passed in the Upper House on Friday, after which it will go to the Governor General for his proclamation.

“We are doing this deliberately because we not only want to send the message but we want to send it correctly. When the officers who work hard, long hours, put themselves at risk and find a criminal killer with guns, he will be in jail, locked away in the State’s care for some time and the police officer can get on with his work,” Chang said, adding that the Act will be approved and as soon as it is green-lighted it will be implemented.

“As soon as it is approved in the Senate, I will announce the appointed day and the police will have a new tool to operate; a tool that we think will be effective in dealing with all the criminal activity. And when they do it, it will have an impact on the crime,” he said.

So far this year, Jamaica has recorded 1,089 murders as compared to 1,016 for the same period ending September 14 last year.