WASHINGTON, DC, - Renowned theologian, and former pastor of the East Queen Street Baptist Church, The Rev. Dr. Horace Orlando Russell, was eulogised Saturday, April 17, 2021, at a stirring service of thanksgiving for his life at DeBaptiste Funeral home auditorium at the town of Bryan Mawr, near Philadelphia in Pennsylvania, USA.  He had died April 5, aged 91. 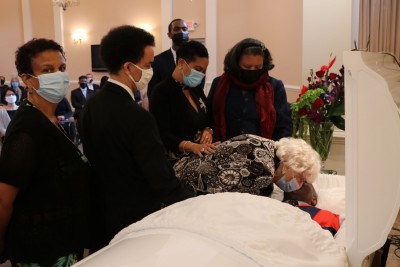 Mrs. Beryl Russell, the widow Rev. Dr. Horace Russell surrounded by her children , gives a farewell kiss to her husband of 63 years at on Saturday April 17.2021 at a service of thanksgiving for his life at the DeBaptiste Funeral home auditorium at the town of Bryan Mawr, near Philadelphia in Pennsylvania, USA. (Photo Derrick Scott)Some sixty invited guests joined his wife Beryl and their children and other members of the family for a two-hour going home ceremony, while many others from, Geneva, Barbados , Jamaica, Canada, and the United Kingdom, joined by Zoom.

A number of tributes were offered up by various organizations, including East Queen Street Baptist Church of Kingston, which he served for more than 15 years as pastor; the Jamaica Baptist Union; the Philadelphia Baptist Association; the Baptist World Alliance; the National Council of Christ in the USA; the American Baptist Historical Society; and from Jamaica’s Ambassador to the United States, Her Excellency Audrey Marks.

Jamaica’s Honourary Consul to Philadelphia, Mr.  Christopher Chaplin, delivered the tribute on behalf of the Ambassador, who said, “that the Rev. Dr. Russell was a Jamaican of no mean order is attested to by the fact that his passing is felt deeply not only by his family or among Jamaicans, but in fact around the world.”

She described Dr. Russell as “a pioneer voice among theologians – in Jamaica, the Caribbean, and globally; as well as spiritual leader, teacher, and scholar who harnessed all his God-given talent into a calling that he placed in service to many, as a great mentor, over a rich, blessed, and long life.” 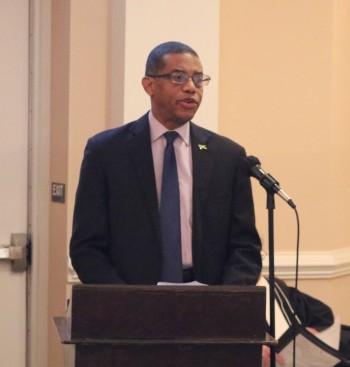 The Ambassador pointed out that “the diaspora has benefited directly from the Rev. Dr. Russell’s outreach, specifically through Saints Memorial Baptist Church in Philadelphia, where he served until retirement not long ago.”

She added: “Although his later years were here spent in the USA, Dr. Russell’s contribution will not be forgotten any time soon – neither in Jamaica nor on the world stage, where he gave stellar service as well.”

“Within and outside of his native land, Dr. Russell represented us very well and, for that, we are grateful to his family for having so generously lent him to the cause of humanity. This great son of Jamaica had lived ever faithful, ever true to the Jamaican National Pledge, his fingerprints evidenced in many an individual life and Christian ministry across the globe as well,” Ambassador Marks concluded.

In delivering the eulogy, his niece, Mrs. Cheryl McCalla, described Dr. Russell as an outstanding man of God, an excellent father and a loving husband. She said he was committed to his family and his parishioners.

She described him as an outstanding church historian, ecumenical leader and one who has been associated with the world’s greatest religious leaders and thinkers.

“Horace Russell has always maintained a simple but profound understanding of the Christian faith and a love for his homeland; has been a beloved mentor and friend to hundreds of young people; and a wise counsellor and beloved pastor,” his niece nostalgically reminisced.

Delivering the sermon was the Rev. Steve Robinson, pastor of the Mattapan Baptist Church in Milton, Massachusetts.

The Reverend Horace Russell died on the 5th of April leaving wife Beryl, daughters Elizabeth and Heather as well as son Jonathan.

Three memorial services are to be held later on: at East Queen Street Baptist Church; in Florida; and one in Philadelphia.