KINGSTON, Jamaica – Commissioner of Police Major General Antony Anderson reported an 81 percent drop in murders while shootings fell by 56 percent after the declaration of a State of Public Emergency in the south-eastern parish of St. Catherine last month. 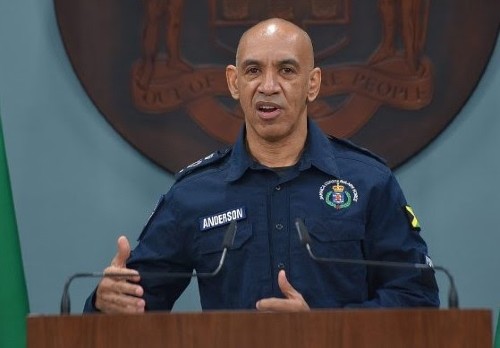 The Commissioner said that over the 14-day period, 66 persons were charged, 28 of whom were for serious crimes, including murder, shooting, and sexual offences, while six persons were charged with breaches of the Law Reform Fraudulent Transactions Act or lottery scamming.

“Five wanted persons were taken into custody, three of whom were charged for sexual-related offences and two for murder and illegal possession of firearm and ammunition. Two major players involved in the gang conflicts in both the St. Catherine North and South [police] divisions were also arrested and charged with murder, shooting, and illegal possession of a firearm,” he said.

Providing the figures during a virtual press conference on July 5, he added that seven illegal guns were seized during the period.

Additionally, he said a 14-year-old girl who was reported missing was identified by a member of the security forces at a checkpoint in the company of an adult male. The adult male has since been charged with rape and having sexual intercourse with a person under the age of 16.

The Commissioner further noted that two 19-year-old males who were taken into custody during the state of public emergency as persons of interest in the double murder of Corporal Delwin Jackson and Kenroy Chandler on August 18th, 2021, were charged with murder.

He said gang conflicts in St. Catherine in early June accounted for some 21 murders and nine shootings.

Meanwhile, he pointed out that there has been a one percent reduction in major crimes.

“Since our last press briefing [in May], we have managed to reduce the gap in murders from an increase of 6.3 percent as was reported then, to 1.9 percent as at the end of June. This represents a 4.4 percent reduction in murders over that period,” he noted.

According to the Police Commissioner, gang conflicts account for some 74 percent of murders, with interpersonal conflicts accounting for 14 percent; other criminal acts, six percent; and mob killings, another one percent. He said the remaining five percent is still being determined.

Meanwhile, shootings are down by nine percent, and rape, down 13 percent. Robberies went up by seven percent, while break-ins increased by four percent.

“We had anticipated an even greater decline in murders and shootings as our operational and investigative initiatives took effect. However, this was impacted by the increased gang conflicts in St. Catherine during the month and the murder of the mother and four children in Clarendon on the 21st of June,” he said.

The Commissioner reminded Jamaicans to contact the police to intervene in conflicts in communities before they become a crime.

He pointed out that gang conflicts in St. Catherine in early June accounted for some 21 murders and nine shootings.