KINGSTON, Jamaica – Commissioner of Police, Major General Antony Anderson, says five people will be extradited to the United States on lottery scamming-related offences and other serious crimes later this week. 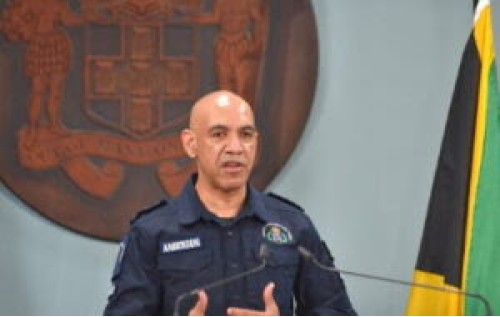 Commissioner of Police, Major General Antony Anderson, speaking at virtual news conference (JIS Photo)He said lottery scamming investigations will continue to be a significant area of collaboration between law-enforcement entities locally and overseas, as the proceeds of scamming are used to purchase illegal guns, pay contract killers, and sustain the operations of gangs.

“Lottery scamming… is one of the major sources of funding for gangs and the criminal underworld, and it is increasingly the driver of murder and other violent crimes,” he told a virtual news conference.

Anderson said that just over a week ago, several persons were taken into custody for breaches of the Law Reform (Fraudulent Transactions) Act following major police-military operations led by the Lottery Scam Taskforce in St. Ann.

He said that among those taken into custody was a 16-year-old, and five high-end motor vehicles were seized.

Commissioner Anderson said the involvement of young people in lottery scamming is becoming a growing trend and urged parents, guardians and teachers to be vigilant and report these activities to the police.

“We have seen the associated violence result in the death of family members and friends, so this is not a violent-less crime. It has had growing amounts of violence associated with it,” he said.

Meanwhile, the Jamaica Constabulary (JCF) Force is reporting a seven per cent increase in the seizure of illicit guns in the first six months of 2022 over the same period last year.

Anderson said that 392 firearms have been taken off the streets through the collaborative efforts of the JCF, Jamaica Defense Force (JDF), and other law-enforcement partners.

He said the figure represents the largest haul of weapons in the first half of each of the last five years.

The Commissioner reported that the JCF will continue to use all the tools available to confiscate illegal guns, pursue the gangs, and go after the money used to fund their activities.

He is urging persons with information that could lead to the seizure of guns and/or the capture of gunmen, to call Crime Stop at 311, the tip line at 811, or police emergency at 119.

“While we carry out our duties, I want to remind the public to continue to support us by saying something if you see or hear something,” he urged, adding that as it relates to the use of the shot-spotter gunshot detection system to aid in response to incidents of shooting, various technologies will be rolled out in crime hotspots.

He told reporters that the operational deployments have been working and that “obviously, the more we can implement these technologies, it’s the better, so it’s something that we have been looking at for a while”.

The Commissioner said the new technologies will be linked to existing measures such as JamaicaEye.