KINGSTON, Jamaica – The Jamaica Constabulary Force (JCF) says 1,463 murders have been committed here last year, 132 or almost 10 percent above the murder total for 2020. 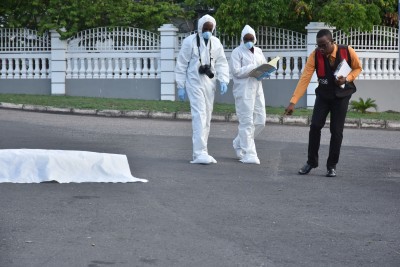 Forensics experts at a crime scene in Jamaica (JCF photo)According to the preliminary figures released here, the St Andrew South Police Division, which covers more than 20 inner-city communities, accounted for 164 murders in 2021, the most in any single police division for the year.

The St Andrew South Police Division also recorded the most murders across the island with 143.  Westmoreland, with 128 murders, recorded the biggest increase last year, up from the 80 murders reported in 2020.

The Kingston Central Police Division recorded a 55 percent increase in murders when compared with 2020, registering 79 murders.

The preliminary figures show that Portland recorded 15 murders, the fewest of any of the 19 police divisions, reflecting however a 50 percent increase over 2020.

The figures show that Trelawny, with 17 murders,  a 26 percent decline,  St Catherine North 99 killings, down by 22 percent; and St Ann with 55 murders or a  21 percent decline, led the police divisions in which murders were down last year when compared to 2020.

According to the JCF figures, all other major crimes decreased last year, with shootings being almost two percent below 2020, reported cases of rape 25 percent below the previous year, and robberies showing a decline of 24 percent.