KINGSTON, Jamaica – The Jamaica government Tuesday declared a State of Public Emergency (SOE) in the parishes of Clarendon, St Catherine and sections of Kingston and St Andrew, even as it acknowledged that the country is not immune to the high level of criminality confronting the region. 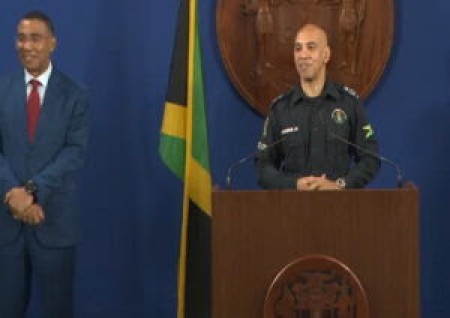 Police Commissioner Major General Antony Anderson at podium and watched by Prime Minister Andrew Holness (CMC Photo)Prime Minister Andrew Holness, speaking at a news conference here, told reporters that an SOE has also been established for the parishes of St James, Westmoreland and Hanover, as the increase in crime and violence presents a threat to property and public order.

“The government, after careful consideration on the advice of the security chiefs, have decided to advise the Governor General that it was necessary and indeed appropriate to declare States of Public Emergency in these areas. We have seen an increase in criminal activity in these areas and indeed a threat to property and in some instances public disorder,” Holness told reporters.

He said that over the last six months there has been a significant increase in murders on the island, adding that “right across the region, in particular along the Caribbean basin, societies like Jamaica are experiencing a persistent increase in homicides, shootings and other dangerous crimes”.

Police Commissioner, Major General Antony Anderson, told the news conference that as at November 13, the country had recorded a total of 1,360 murders. Last year, the figure stood at 1, 231 for the same period.

“We will be targeting guns, gangs and gunmen who are the chief architects of the sort of violence we are seeing in the society,” Anderson said, promising that the law enforcement agencies will continue in their efforts to root out criminals.

Holness said the crime situation is “not unique to Jamaica” and that on a visit to Trinidad and Tobago, recently “they too are experiencing a similar situation.

“There are many reasons for this and the criminologist and sociologist and other professionals have pointed to the growing entrenchment of gangs and gang culture in the society,” Holness said, noting that these experts have also pointed to the ease of access to firearms and a parallel trade in narcotics with firearms.

“Jamaica is experiencing all of these. It is not a problem that has existed for five years, for a decade, for 20 years. We have been experiencing that problem for over 40 years,” Holness said, adding “what has changed is that the gangs have morphed into intelligence organizations.

Holness said that the gangs were also able to launder their ill-gotten gains and to establish legitimate operations “and they have deliberate strategies to infiltrate public entities and public officers to corrupt them (and) to facilitate their illicit activities”.

Holness said that while his administration does not intend to arbitrarily implement SOEs his administration has nonetheless adopted a systematic way to deal with the upsurge in crime, that also include a social intervention strategy.

Holness told reporters that the government has crafted the use of these powers “in a way to ensure that ultimately we can say we have protected the life and other rights of our citizens”.

Prime Minister Holness said he hoped the main opposition People’s National Party (PNP) would support the SOEs noting that appeals have been made by several members of Parliament, including members of the Opposition, for assistance in dealing with the crime situation in the country.

“Indeed, I have been appealed to by several members of parliament including from the opposition asking for greater assistance in their constituencies as a result of the increased levels of crime and violence. So we are expecting that there will be support for the declaration of this state of public emergency and are hoping that the Opposition will offer their critical support,” he said.

Chief of Defense Staff Rear Admiral Antonette Wemyss-Gorman assured the public that the security forces will do everything in their power to ensure that the rights of citizens are not violated during the period of the SOE.

“Since we have been declaring or using this tool, there are no cases that the security forces have abused the human rights of any Jamaicans under the SOEs, but my further assurance is that once we put new persons into the fight we ensure that they are exposed and trained appropriately before they are deployed,” she said.

The authorities have also introduced a gun amnesty that ends this weekend, and the Police Commissioner warned that the initiative does not prevent a person from being charged for being in possession of a firearm.

“What it does is allow you to carry it in. In other words if you are involved in a crime at the moment with a firearm you have no amnesty. You are going to be arrested and I am going to charge you. If you are on your way to do a criminal activity …that is not what the amnesty is geared towards.

“What the amnesty is for, is for people who have firearms and wish to turn them over to the state…and you can do it without us pursuing any charges against you,” Anderson said.