KINGSTON, Jamaica – The Jamaica government has announced a tightening of the measures aimed at curbing the spreading of the coronavirus (COVID-19) after the island recorded more than 800 new cases within six days pushing the number of positive cases to 52,089 and the confirmed deaths to 1,178. 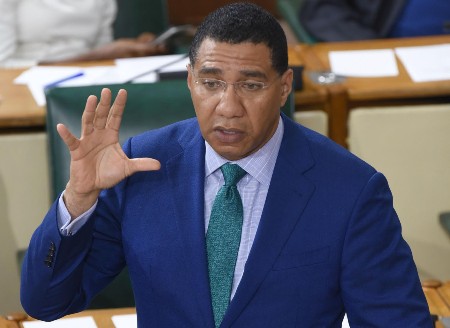 Holness told the nation “it is clear that we need to act now,” as he announced that effective Tuesday, , the curfew will commence at 8:00pm (local time) and will run until 5:00 am and that on Sundays and public holidays, the curfew will run from 3:00 pm to 5:00am.

Holness said that on Emancipation Day, August 1, the curfew will run from 3:00pm to 5:00am the next day with the same time period for the holiday, the following day.

The government said places of worship, gyms, dining establishments, there will be reduced from 70 per cent to 50 per cent limit for small events:

The authorities said that the country for two straight months from May 20, did not record a daily case load of new infections above 100, but that changed with the island averaging 52 daily new cases of COVID-19 in June increasing to 62 per day in the first two weeks of July.

But from July 20, the island recorded 132 new cases were recorded, followed by five more days that recorded numbers above 100. During this period the positivity rate has been as high as 16.8 per cent.

Health and Wellness Minister Dr. Christopher Tufton said that Jamaica is now averaging 135 new cases per day and total cases recorded in July so far is 1,818. He said the transmission rate has moved from medium to very high in a matter of days.