KINGSTON, Jamaica –The Jamaica government has announced revised coronavirus (COVID-19) protocols as the island moves to curb an upsurge in cases in recent days. 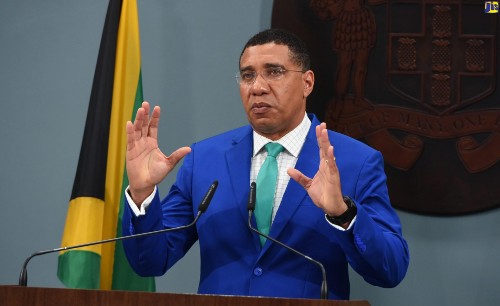 He said that the new measures will remain in effect for three weeks until August 31.

There will be no more than 50 people allowed at churches, with 30 persons being allowed to attend funerals.

No more than 50 persons will be allowed at weddings and night clubs and places of amusement have been closed. There will also be no entertainment events and gyms, restaurants, zoos and bars will operate at 50 per cent capacity.

The government said that the goal to start face-to-face learning at schools is now challenged and as a result it is now targeting mid-September.

But Prime Minister Holness said that this depends on what happens in respect of the COVID spread amid the third wave.

”We placed and developed a strategy and that strategy was we saw the raising public pressure, we saw the fatigue and tension in the society, that was under the serious imposition from February this year going into June,” Holness said as he spoke of the new measures.

But he has also warned that no-movement days could be reintroduced if the measures do no halt the spread.

Jamaica has recorded 1, 231 deaths and 55,140 positive cases of the virus, since the first case was detected in March last year.