PORT AU PRINCE, Haiti – A human rights group is warning that several suspects held in the assassination of President Jovenel Moise at his private residence on July 7, could be released because of a number of legal violations. 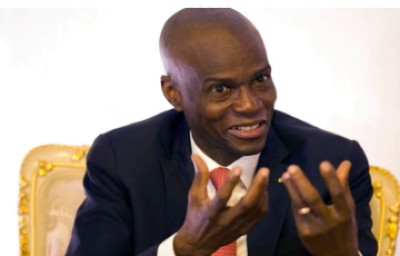 President Jovenel Moise (File Photo)Earlier this week, the Dean of the Court of First Instance of Port-au-Prince, Bernard Saint-Vil, appointed Justice Gary Orélie as the new investigating magistrate to probe the assassination of Moise, two weeks after another judge, Mathieu Chanlatte , had stepped down.

But in a report, the Center for Analysis and Research in Human Rights (CARDH) said that after having examined the actions taken in the prosecution phase both by the Government Commissioner and by the police, it believes that due to numerous procedural flaws, violations of the Constitution and of the criminal law, the trial could be affected and even cause the release of some suspects.

“Those arrested in the investigation into the president’s assassination were questioned in the absence of their lawyer or witness. They did not appear before their natural judge to rule on the legality of their arrest” within the time limit set by the Constitution in its article 26 which stipulates,” the CARDH said in its report.

It notes that “no one may be kept in detention if he/she has not appeared within 48 hours following his/her arrest, by a judge called to rule on the legality of the arrest and if this judge has not confirmed the detention by reasoned decision”.

The human rights group notes that in the event of a contravention, the accused is brought before the justice of the peace who decides definitively.

“In the event of a misdemeanor or felony, the accused may, without prior permission and on simple memorandum, appeal to the dean of the court of first instance of the jurisdiction who, on the conclusions of the Public Prosecutor, rules at the extraordinary, hearing pending, without postponement or rotation, all cases ceasing on the legality of the arrest and detention.”

The CARDH notes also that “at the procedural level, these first elements indicate that the prosecution was carried out in violation of the Constitution, the Code of Criminal Procedure and international human rights instruments.

“Criminals can be released at any time, reports and exhibits, essential to the trial, can be excluded during its course… All this will affect the course of the trial,” it warned in the 14-page report.

Moise was shot and killed at his private residence overlooking the capital on July 7, when armed gunmen stormed the residence. His wife, Martine, was seriously injured and had to be flown to the United States for medical treatment.

Police have arrested more than 40 suspects, including 18 former Colombian soldiers and 20 Haitian police officer, but there is no clarity about who was behind the plot to kill Moïse, who had been ruling Haiti by decree over the past year.

Haiti has called on the United Nations to conduct an international investigation into the murder along with a special court to prosecute the suspects.