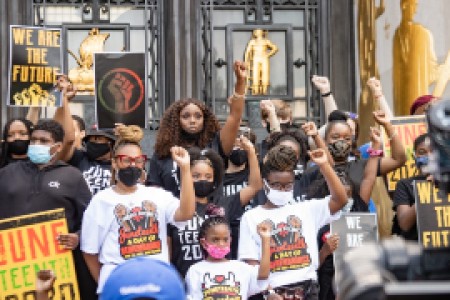 On May 25, 2020, George Floyd, a 46-year-old black man, was murdered in Minneapolis, Minnesota, while being arrested on suspicion of using a counterfeit US$20 bill.

During the arrest, Derek Chauvin, a white police officer with the Minneapolis Police Department, knelt on Floyd’s neck for nine minutes and 29 seconds, resulting in Floyd’s death.

Amid nationwide protests and global outrage, Chauvin was convicted earlier this year in Floyd’s murder.

Louis, the daughter of Haitian immigrants, said the six-foot-tall sculpture of Floyd, which was created by artist Chris Carnabuci, will be displayed at Flatbush Junction in Brooklyn for about two to three weeks before moving to Union Square in Manhattan.

“Juneteenth, our annual holiday commemorating the end of slavery on June 19, 1865, has been recognized by Black Americans since the 1880s,” Louis told the Caribbean Media Corporation (CMC). “And this ‘Second Independence Day’ continues to resonate in new ways.

“This year’s celebration comes at a moment of sweeping social and generational change,” she added. “Across the country, Americans are reckoning with past sins and looking to build a more equitable future.

“In that same spirit, on Saturday, we will honor our black ancestors and all those civil rights heroes who fought for freedom before us,” she continued. “We are also going to recommit ourselves to the fight for equality with a 45-minute selection of speeches, prayer, poetry, music, dancing and drumlines.”

The day before, in an overwhelming vote of 415-14, the US House of Representatives passed S. 475, the Juneteenth National Independence Day Act, to commemorate Juneteenth, the national remembrance of the end of chattel slavery in the United States, as a US federal holiday.

“I am so proud to join President Biden, Vice President Harris and my colleagues for the singing this historic legislation into law,” Clarke, the daughter of Jamaican immigrants, told CMC after the signing ceremony.

“This year commemorates the 156th anniversary of Juneteenth, when Union troops arrived in Galveston, Texas, declaring the abolition of slavery two years after the Emancipation Proclamation and two months after the end of the Civil War,” added the representative for the predominantly Caribbean 9th Congressional District in Brooklyn. “With their freedom, the original sin of the American experiment came to an end, and a chapter— of optimism and promise—opened.

Clarke noted that, on June 19, 1865, the United States’ last remaining enslaved persons were informed of their liberation, more than two years following the Emancipation Proclamation.

Over the course of the subsequent 156 years, she said June 19 became known as “Juneteenth”, and has been celebrated and commemorated by untold individuals throughout the world.

“All Americans can feel the power of this day, and learn from our history,” said the US president at the White House ceremony, stating that it was the first US national holiday established since slain civil rights leader the Rev. Dr. Martin Luther King, Jr.’s Birthday in 1983.