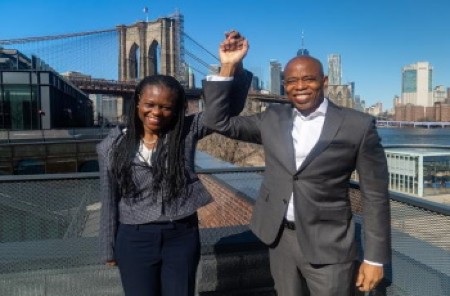 Adams, 60, held a 10-point lead in the round-by-round eliminations through round seven, when the margin narrowed in the final round in the city’s first ranked-choice voting election.

“We congratulate Eric Adams on a well-deserved victory, and on becoming only the second Black mayor in New York City history,” Bichotte Hermelyn, who represents the 42nd Assembly District in Brooklyn.

She told the Caribbean Media Corporation (CMC) that Adams rose from humble beginnings by dedicating his life to uplifting all New Yorkers.

“Adams’ victory today is a significant win for Brooklyn, New York City, and the State. Eric has the judgment and experience to help restore the city’s economy, and make our streets safe again. This is a major step forward.

“As our 110th Mayor, Eric will usher in a new era of recovery by delivering justice, safety and equity to the people,” said  Bichotte Hermelyn, adding that “while we wait for certified results, we also congratulate mayoral candidates Kathryn Garcia and Maya Wiley on running successful campaigns and breaking barriers.

“We look forward to building a stronger, more inclusive city for everyone,” she said.

After the Board of Elections counted 118,000 absentee ballots on Tuesday, Adams’ significant lead on Election Night, June 22, shrank to a single percentage point, or an 8,400-vote lead over his closest rival, Garcia, the city’s former sanitation commissioner. But it was enough to hold her off.

“While there are still some very small amounts of votes to be counted, the results are clear: An historic, diverse, five-borough coalition led by working-class New Yorkers has led us to victory in the Democratic primary for mayor of New York City,” said Adams in a statement on Tuesday night.

Garcia and Wiley, the third-place finisher and former counsel to incumbent Mayor Bill de Blasio, are yet to concede defeat.

Garcia’s spokeswoman, Lindsey Green, said in a statement that his campaign was “currently seeking additional clarity on the number of outstanding ballots and are committed to supporting the Democratic nominee.

“We will have more to say about the next steps shortly Today, we simply must recommit ourselves to a reformed Board of Elections and build new confidence in how we administer voting in New York City.

“New York City’s voters deserve better, and the BOE must be completely remade following what can only be described as a debacle,” she added.

Adams said in his statement that his focus now is on being triumphant in the general elections.

“Now we must focus on winning in November, so that we can deliver on the promise of this great city for those who are struggling, who are underserved and who are committed to a safe, fair, affordable future for all New Yorkers,” he said.