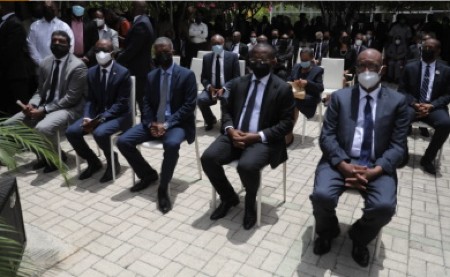 Haiti’s new Prime Minister Dr. Ariel Henry (R) attends an official ceremony in honor of assassinated President Jovenel Moise in Port au PrinceDr. Ariel Henry, who had been named as prime minister by President Jovenel Moise two days before he was assassinated on July 7, was sworn in during a ceremony in the capital on the same day official commemorations were being held to honor Moise, who was killed when armed gunmen invaded his private residence, pumping at least 12 bullets into his body.

During the ceremony where he took the oath of office, Henry said he plans to meet with various sectors of society in the coming days to build a political consensus to address the problems Haiti faces.

“It is in the context of extreme polarization … that we must find and implement a lasting solution to the multifaceted crisis with which we are confronted,” he said.

But the opposition parties have described him as a puppet of the international community.

““Ariel Henry does not have the legal and constitutional provisions to set up a government. The international community is on the wrong track. It takes a broad consensus, accompanied by political agreement, to break the current political impasse. The Core Group is on the wrong track,” said André Michel, one of the leaders of the opposition groups here.

The opposition coalition known as the Democratic and Popular Sector called Henry a puppet and rejected his appointment.

“This step is only a political provocation that will add fuel to the fire and push the country further into crisis,” it said.

Last weekend, the “Core Group” of international diplomats called on interim prime minister Claude Joseph to step down and allow for Henry to form a “consensual and inclusive” government.

The “Core Group” representing countries such as Germany, Brazil, Spain, the United States, France, the European Union and representatives from the United Nations and the Organization of American States (OAS), also said it was strongly encouraging Henry to continue the mission entrusted to him to form such a government.

Joseph had said he was stepping down “for the good of the country” that is still reeling for Moise’ assassination and the injury to his wife, Martine, who has returned to Port au prince from Miami where she had been receiving medical treatment arising out of the attack that killed her husband.

Moise had been governing by decree since last year, and before he was replaced, Joseph had said that presidential and legislative elections would be held on September 26 with the second round set for November.

Prior to him being sworn into office, Henry had in a video message said “we will need this unity to overcome the many challenges that beset us.

“Some have observed the latest events with amazement, others wonder with reason about the management of the country,” Henry said, adding that he had also met with various unidentified actors as well as civil society and the private sector.

“I intend to continue and deepen these discussions, because it is the only way to bring the Haitian family together,” he said.

Meanwhile, the head of the Haitian National Police, Leon Charles Tuesday announced that four more formal arrests, including at least three police officers, had been made as the investigations continue into Moise’s death.

“There was infiltration in the police,” said Charles, without providing additional details.

The authorities have already held a 26 people, including three Haitian Americans, in connection with the murder.

Moise’s wife says the “moral support” of the population has provided her with the strength needed to ”go through this great ordeal” as the nation gets ready for his official funeral on Friday.

“The First Lady of the Republic wishes to express her deep gratitude to the Haitian people for their messages of compassion and solidarity towards their family, following the assassination of the President of the Republic HE Mr. Jovenel Moïse, in his private residence,” she said in a statement, adding that she “very touched by all the expressions of sympathy shown towards her”.