PORT AU PRINCE, Haiti – Haiti says it will end on Friday the search and rescue operations more than two weeks after a powerful earthquake struck the southern part of the French-speaking Caribbean Community (CARICOM) country, killing more than 2, 200 people and 300 others missing and now feared dead. 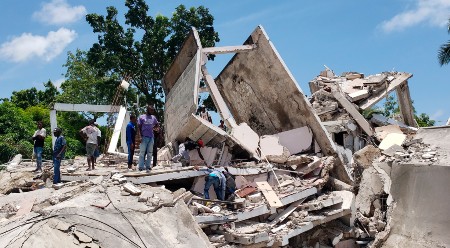 The country was rocked by an earthquake with a magnitude of 7.2 on August 14, and the Technical Directorate of the National Emergency Operations Center (COUN) during a working meeting with representatives of the sectors involved in the management of the response, said that the search and rescue mission for survivors will end this Friday.

The mission had been concentrated mainly in the three departments of the Great South (South, Nippes and Grand’Anse).

The COUN said that since the quake struck, several rescue teams have been in the field rescuing people from the rubble as well as those trapped in the mountains of the Massif de la Hotte following landslides.

The estimated 154 rescuers including 27 women, were joined by international rescue groups from the United States, Colombia; France, Brazil; United Kingdom, Chile, the Dominican Republic and Mexico.

“We will publish the final report of this work based on the data collected, processed and analyzed with the support of OCHA,” said COUN technical director, Jerry Chandler.

Earlier this week, Prime Minister Ariel Henry, speaking at the launch of the National Workshop on Post-Earthquake Damage Assessment (PDNA), reiterated his call for the local authorities to act quickly in providing assistance to those affected by the quake.

“We have an obligation of results and the government does not intend to let this reconstruction opportunity pass. I place the recovery and reconstruction under the sign of planning, therefore, of the vision of the future. I take this opportunity to review the 2010 development strategy,” he said.

He said this is an opportunity for the government to rebuild the affected departments, according to the principles of planning and sustainable development.

“Reconstruction is multidimensional and complex. Hence the need for an integrated approach, anchored in the overall vision of development. This reconstruction cannot be done without a real recovery and reconstruction plan. It must be based on an assessment of the real needs of the affected regions. I reaffirm my determination to endow the Government with a public policy plan for the benefit of the affected populations,” he added.

The representatives of the United Nations, the World Bank, the Inter-American Development Bank, the European Union and the American development agency who took participated in the launch also gave assurances that their institutions were ready to support the government in the post-earthquake assessment work and the implementation of the reconstruction plan.

Meanwhile, it has been announced that the re-opening of schools will take place on September 21.

Schools were originally scheduled to begin on Monday, but the decision to postpone classes was taken during the meeting of the Council of Ministers on Thursday.

The authorities said that the new school year will begin on September 21, 2021 for the seven departments not directly affected by the earthquake and on October 4 for the Grand South (South, Nippes and Grand’Anse)

“All the students in the South must be able to go to school. For schools to open, we have a lot of work. We must remove the rubble and put structures to accommodate the children,”  Prime Minister Henry said.

“The back-to-school period is still very difficult in the country,” he said, noting the socio-political and economic environment.

“We want to make arrangements to pay allowances to parents of pupils and teachers. All this takes time and that is why we have postponed the school in the southern peninsula and in the rest of the country,” he said.