PORT AU PRINCE, Haiti – Haiti will remain in a state of national mourning until July 22 in tribute to President Jovenel Moise, was shot and killed when armed gunmen stormed his private residence on the hills just outside the capital, on Wednesday, according to a decree published here. 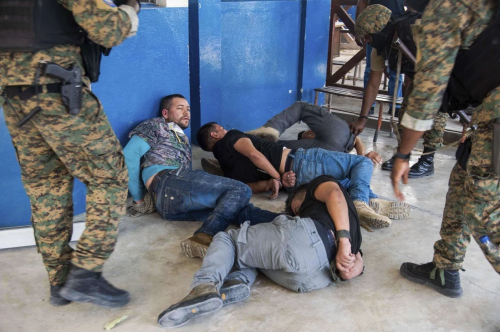 Mercenaries being lined up to be paraded before the media following gun battle with Police. (Photo: Associated Press)It said that during the days national mourning “the national flag will be half-masted, discotheques and other similar establishments will remain closed”, and radio and television stations to provide suitable programming.

On Friday, the law enforcement authorities were continuing their search for at least eight people who they said had been part of the “mercenaries” that carried out the attack that also left First Lady, Martine Moise, severely injured and having to be flown to the United States for medical treatment.

Interim Prime Minister Claude Joseph has promised that justice will be delivered on behalf of the assassinated head of state, while the Director General of the National Police of Haiti (PNH), Léon Charles, said that several weapons had been seized from those captured by police following the killing.

He said that the PNH had mobilized all its staff “against the foreigners who entered the territory and cowardly assassinated our President” adding that they had come here to “sow mourning on the territory”.

The authorities said that the 28 alleged assailants included 26 Colombians and two Haitian-Americans and that “ we arrested 15 of the 26 Colombians, killed three and eight are on the run.

United States and Canadian media are reporting that one of the dual citizens arrested, James Solages, 35, is from Florida and was a former bodyguard at the Canadian embassy in Haiti.

An investigating judge told local media that Mr Solages and the other US citizen, named as Joseph Vincent, had said they were there as translators for the mercenaries, after finding the job on the internet.

“The mission was to arrest President Jovenel Moïse… and not to kill him,” Judge Clément Noël told Haiti’s Le Nouvelliste newspaper.

The Central Directorate of the Judicial Police (DCPJ) said it will continue the investigation to bring them to justice.

“We are looking for the others who are on the run and we are asking for the support of the population, so that the police can recover all the murderers and hand them over to justice,” Charles added.

Those detained have been paraded before the media, but it is still unclear who organized the attack and with what motive. But Joseph told the media that the 53-year-old president may have been targeted because he was fighting corruption.

Taiwan has confirmed that 11 of the suspects were arrested at its diplomatic compound, where they had broken into one of its courtyards.

Colombia’s government has confirmed that at least six of the suspects appeared to be retired members of its military. It has pledged to assist Haiti with its investigation efforts. The US state department, meanwhile, said it could not confirm if any of its citizens had been detained.

Canada’s Prime Minister Justin Trudeau has expressed shock and sadness over his murder.

“We wish a full recovery to first lady Martine Moïse who was injured in the attack, and our thoughts are with her as she mourns the loss of her husband,” he said, joining the international community in denouncing the assassination.

“Canada stands with the people of Haiti during these difficult and uncertain times,” he added. “Our two countries are united by a strong friendship, built on enduring people-to-people ties. Canada has a deep and longstanding commitment to Haiti, and we are ready to offer any assistance it needs.”

Trudeau said Canadians in need of emergency consular assistance in Haiti should call the Embassy of Canada in Port-au-Prince.

The killing has triggered some civil unrest in Haiti, the poorest nation in the Americas. A state of siege remains in effect in the French-speaking Caribbean Community (CARICOM) country.