NEW YORK, New York – A Brooklyn, New York-based umbrella organization calling itself Guyanese Organizations Against Racism (GOAR), which comprises 25 groups in the New York tri-state area, says it will on Sunday host a massive march and rally in Brooklyn against alleged racism in Guyana. 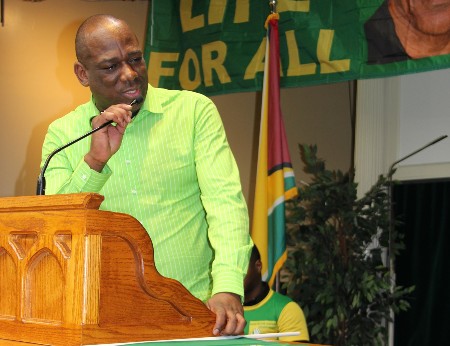 It said the events are part of a series of activities it is hosting, through Tuesday, to draw wider public awareness of alleged racism by the incumbent People’s Progressive Party (PPP) Government in Guyana.

“The events are to create awareness of the rapidly deteriorating political, social, economic situation in Guyana; pervasive racial injustice against African Guyanese and other non-supporters; the PPP misuse of the criminal justice system and Guyana Police Force as a vendetta hit squad against Black citizens,” Rickford Burke, co-chair of GOAR and president of the Brooklyn-based Caribbean Guyana Institute for Democracy (CGID), a GOAR member, told the Caribbean Media Corporation (CMC) Sunday morning.

“The Diaspora conference will formulate a strategic plan to hold the PPP regime accountable at home and in the international community; expose PPP racism, bad governance and other atrocities; and establish a permanent campaign to disrupt and eliminate racist governance in Guyana,” he added.

Burke said the march assembly point is at Church and Flatbush Avenues in Brooklyn, at 12:00 noon.

He said the march will proceed south on Flatbush Avenue to Grand Army Plaza (Flatbush Avenue & Eastern Parkway in Brooklyn), where the grand rally will take place.

Burke said the rally will feature speeches, poetry and entertainment, with several Members of Parliament from Guyana, Guyanese Diaspora leaders, as well as US elected officials and civil rights leaders, slated to speak.

GOAR will also host a Leaders’ Conference on Monday and a town hall meeting the next day in Brooklyn, Burke said.

“These activities mark the launch of a series of sustained activities to create awareness about PPP racist governance and ethnic dominance in Guyana,” he charged, adding that GOAR, among other things, will “aggressively campaign” against “the unjust, racist firing of over 1800 Black government employees on the basis of their race and the unlawful termination of government contracts from Black contractors.

“We will also mobilize the region and international community against the apartheid regime’s attempt to ban Haitians and Nigerians from traveling to Guyana, while welcoming Venezuelan, Chinese, Indian, Pakistani, Bangladeshi and other citizens who are not identified in Guyana as Black,” Burke further charged.

He said GOAR is collaborating with churches, community organizations, BLM, sports, youth and music groups to mobilize attendance at the march and rally, and has urged Guyanese from all walks of life to attend the events.