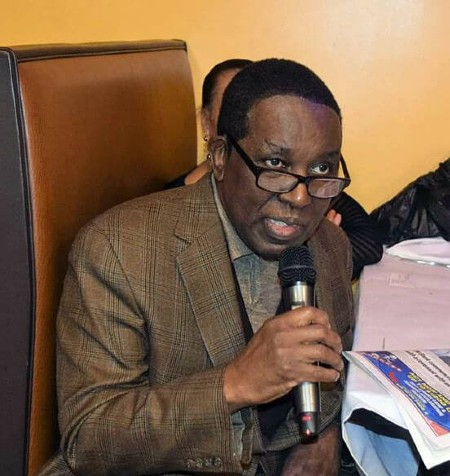 Colin Moore (File Photo)President of the Brooklyn, New York-based Guyana Tri-State Alliance, Inc, Patricia Jordon-Langford said that the Guyanese-born, Brooklyn resident, Moore, who is also best known for the role he played as a lawyer in defending the so-called Central Park Joggers trial,  “passed away quietly” on Sunday.

He said Moore, who was born in Auchlyne Village, Corentyne Coast, Berbice, Guyana, on April 24, 1941, “sadly died of natural causes at the age of 80 in New York City.”

Moore was admitted to the New York State Bar in February 1979.

“Colin Moore was a skilled and tactical attorney who represented many high-profile cases in New York that sometimes provoked the ire of the reactionaries.  He was a civil rights advocate and a proponent for justice, and a patriot for his country of birth, Guyana,” said Jordon-Langford, noting that in 2019, the American Documentary Crime Drama television miniseries, “When They See Us”, directed by Ava DuVernay for Netflix, was released to wide acclaim, based on events of the 1989 Central Park Jogger’s case.

The film explored the lives of the five Black and Latino male suspects, who were falsely accused, prosecuted and falsely convicted for the rape and assault of a white woman in Central Park in Manhattan.

Jordon-Langford said that Moore was the lawyer who represented of one of the “Central Park Five” suspects, Korey Wise, 16.

“And he fought valiantly to prove that the youths were coerced against a blanket of media frenzy. Thirty years later, they were all exonerated after spending six to 13 years in prison. At that time, they were all minors.

“Attorney Colin A. Moore your work is done on this earth. You left an indelible legacy of civil rights activism. Rest in eternal peace.”

“He was a noted public speaker and political analyst,” said Mason, adding “the people of New York, and the people of the Caribbean in particular, owe much to this trailblazing Caribbean pioneer. His presence will be sorely missed.”

Mason said Moore graduated from the University of West Indies (UWI) with a Bachelor of Science degree (Honours) in economics.

On his return to Guyana, Moore was appointed executive director of the National History and Culture Council in 1964, “and helped to create the foundations of a national culture in Guyana,” Mason said.

Mason said Moore migrated to New York in 1970, attended Brooklyn Law School in September 1975 and graduated in June 1978, with the degree of Jurist Doctor (JD).

“Moore will be remembered as a formidable visionary, articulate voice and advocate for the rights of African Americans and immigrants in the Diaspora. My deepest condolences are extended to the wife and children of the late great, brilliant, inspiring and impactful, Colin Moore.”

Yvette Rennie, the Trinidadian-born president of the Brooklyn-based J’Ouvert City International, organizer of the annual Caribbean J’Ouvert in Brooklyn, said the Caribbean community has “lost another trailblazer.”

Moore is survived by his Guyanese-born wife, Ela.