ST. JOHN’S, Antigua – Prime Minister Gaston Browne, Monday described Sir Lester Bird as a “great son of the soil” as he led the country in mourning the death of the island’s second prime minister. 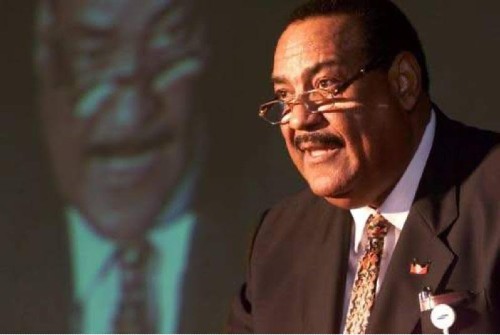 Sir Lester BirdA statement from the Office of the Prime Minister said that all flags be flown at half mast, beginning immediately, and that planning commence for a State Funeral at an agreed-upon date.

It said that the “sad occasion took place this morning at about 6.00 am (local time) and in a personal statement on his Facebook page, Prime Minister Browne extended “sincerest condolences to the family of our National Hero, Sir Lester, who transitioned to the great beyond.

“Sir Lester was a great son of the soil, who contributed significantly to the socio-economic development of our nation. May his soul Rest In Peace and rise in glory,” Browne added.

The statement from the Office of the Prime Minister said that “Antigua and Barbuda has lost one of its most distinguished and heroic sons”.

Sir Lester Bryant Bird, 83, began his political career in 1971 when he was nominated to the Senate. He served as the island’s second prime minister from 1994 to 2004. He was chairman of the ruling Antigua and Barbuda Labour Party (ABLP) from 1971 to 1983.

Antigua and Barbuda Ambassador to the United States, Sir Ronald Sanders, said beyond any doubt, Sir Lester is the architect of modern Antigua, responsible for successfully transitioning the country from an economy dependent on a defunct sugar industry into one of the leading tourism centers in the world

“Under his stewardship, Antigua and Barbuda became a high-income country, transforming the quality of jobs and housing and introducing high end tourist resorts. When he lost the general elections in 2004, Antigua and Barbuda had the lowest rate of unemployment in the Caribbean of five per cent.  Many people had the luxury of two jobs. “

Sir Lester was a keen sportsman, he played golf in his later years, but his passion was cricket.  He was a superb pace bowler with a strategic knowledge of the game.

Sir Ronald said that the former prime minister was a committed regionalist, who was highly instrumental in establishing the Organization of Eastern Caribbean States (OECS) serving twice as its Chairman – the first time he was not yet Prime Minister, but such was the confidence that leaders of the Eastern Caribbean reposed in him.

He strongly influenced the decision to turn the Eastern Caribbean Currency Authority into a Central Bank that serves its member states so well today. He was convinced that the structures of unity and functional cooperation should be maintained in the OECS because the small size of the countries required unity for strength in regional and international bargaining.

Sir Ronald said that in the wider Caribbean, he was literally and figuratively a giant.  It was under his leadership as Chair of CARICOM that with Jamaica’s PJ Patterson and Barbados’ Owen Arthur that the Regional Negotiating Machinery was established for collective bargaining with the European Union.

“Known for his bold oratory, his annual speeches at the UN became a “must listen”, often reported by the international media. He fought tirelessly for a bigger voice in the international community for small states.

“Sir Lester Bird was a progressive thinker whose vast experience and knowledge as tourism minister, foreign minister and prime minister served the people of the Caribbean well in the councils of CARICOM.

“He had a testy relationship with Barbuda, an island in which he spent his summer holidays as a boy and for which he had great affection. He always said, “I am half Barbudan – my mother is Barbudan”. He dreamed of a developed Barbuda, companion to Antigua in the development of modern facilities and infrastructure. He might have achieved it, had he won the 2004 general election. “

Sir Lester said that it is beyond question that Antigua and Barbuda and the Caribbean Community has lost a gold star in the Olympics of West Indian achievement, “and I have lost an irreplaceable friend and close collaborator of 44 years.  I wish it were not so.

“ Rise, Lester, as you always have with your broad smile and the impish twinkle in your eye.  You will continue to inspire through your work that must be recalled and retold for future generations.”

Former Montserrat premier, Reuben Meade, in extending his condolences, said Sir Lester is remembered as being the one to facilitate unfettered access of Montserratians to Antigua after they were displaced by the volcanic activity in the 1990s.

“Montserrat and Antigua and Barbuda have long had a close fraternal relationship. However, we remain deeply grateful to the Government of Antigua and Barbuda, especially under Sir Lester’s leadership for their accommodation of our people in our greatest time of need.

“Sir Lester will forever remain one of the giants of the modern Caribbean society. We extend our sympathies and prayers to his immediate family, and the people of Antigua & Barbuda,” Meade wrote on his Facebook page.