BOGOTA, Colombia – Colombia has called on Haiti to ensure that the former Colombian soldiers detained in connection with the assassination of President Jovenel Moise on July 7 be guaranteed legal and medical rights. 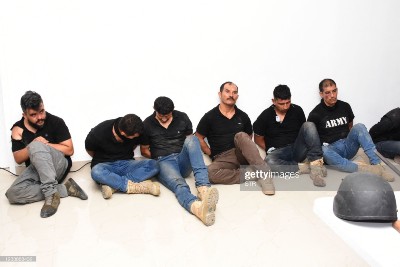 Suspects in the assassination of Haitian president Jovenel Moise are presented to the media by Haitian authorities in Port-au-Price on July 8, 2021. (Photo by STR / AFP) (Photo by STR/AFP via Getty Images)Vice-President and Minister of Foreign Affairs, Marta Lucía Ramírez, has written a letter to Haiti’s ambassador on the issue, the Foreign Ministry said in a statement.

“Through a letter, sent to the ambassador in Colombia, Jean Mary Exil, the vice-president expressed her worry after the visit carried out by the Colombian consular mission, which found irregularities in the detention and assistance to the citizens supposedly involved with the assassination,” the ministry said.

At least 18 Colombians have been detained in connection with the assassination of Moise, who was shot at least 12 times at his private residence overlooking the capital, Port au Prince.

“I remind your government that it has a moral and legal obligation to protect detainees,” Ramirez wrote in the letter.

She said according to the report submitted by the honorary consul of Colombia in Haiti, Julio Santa, the Colombians, “have not received any form of legal assistance, because the Haitian authorities have not assigned public lawyers to protect the right of defense and respect for judicial guarantees at a due process.

“The international treaties on consular protection and human rights guarantee without delay the obligation to designate a defender once the capture has taken place, in particular article 8 of the American Convention on Human Rights.”

In addition, the Colombian Vice President said that some of the Colombians detained have suffered injuries at the time of their arrest and have not receive adequate medical care and also have not benefitted from guaranteed humanitarian conditions.

She said that this is “a violation of Article 5 of the 1963 Vienna Convention, which requires respect for the physical, mental and moral integrity of detained persons,” adding “the duty to protect persons who come under the jurisdiction of a government cannot be ignored, whatever their legal status”.

The Vice President said that Colombia is calling for “the perpetrators of harmful behavior against Colombian detainees to be investigated and punished” adding “Colombia and Haiti have a common history of friendship and fraternity, which in such difficult times demand the greatest collaboration and cooperation based on respect for fundamental rights.”

She said that the Colombian Ambassador to the Dominican Republic, Daniel Cabrales, has been instructed to visit the Colombian detainees at least twice a week and urged the Haitian authorities to accept his accreditation in order for him to carry out his assignment.

Meanwhile, the President of the Electoral Council, Provisional (CEP), Guylande Mesadieu, said that 117 political parties have registered to contest the legislative and presidential elections that the authorities say will be held on September 26 with the second-round schedule for November.