BOGOTA, Colombia, – Less than a week after Colombia publicly called on Haitian authorities to ensure guaranteed legal and medical rights of their nationals detained in connection with the assassination of President Jovenel Moise on July 7, a Colombian official has been allowed to visit the detainees in prison. 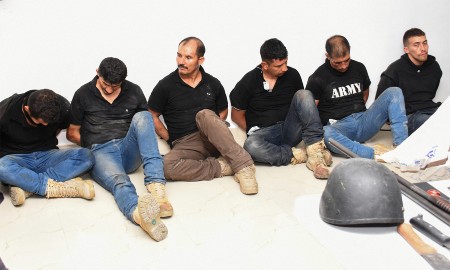 The suspects involved in the murder of Haitian President Jovenel Moise were arrested on July 9th. Picture: AFPVice-President and Minister of Foreign Affairs, Marta Lucía Ramírez confirmed that the Honorary Consul, Julio César Santa, had been able to visit the 18 Colombians detained in prison last Saturday.

“He indicated that they have received a medical evaluation, that they are in better health and that they are isolated from the rest of the prison population in an appropriate place,” Ramirez wrote on her official Twitter account.

The Foreign Ministry had said in a statement earlier this month that “through a letter, sent to the ambassador in Colombia, Jean Mary Exil, the vice-president expressed her worry after the visit carried out by the Colombian consular mission, which found irregularities in the detention and assistance to the citizens supposedly involved with the assassination.

“I remind your government that it has a moral and legal obligation to protect detainees,” Ramirez wrote in the letter,” adding that “the international treaties on consular protection and human rights guarantee without delay the obligation to designate a defender once the capture has taken place, in particular article 8 of the American Convention on Human Rights.”

At least 18 Colombians have been detained in connection with the assassination of Moise, who was shot at least 12 times at his private residence overlooking the capital, Port au Prince.

Ramírez said she had also held discussions with Exil, and reiterated her demands for guaranteed dignified and safe conditions for the Colombians detained in Haiti.

She said that the Vice-Minister of Foreign Affairs, Francisco Echeverri, will visit Haiti, accompanied by a delegation of relatives seeking to have the bodies of Colombians killed during the clashes with the Haitian security forces, following the assassination of President Moise, returned to the country.

Ramirez said that she had also met with the families of nationals detained and deceased in Haiti.

“I told them that we will not leave them alone in this process and I stressed that the situation has been unfair with our country: the world has once again pointed the finger at Colombia and this image is negative for the country”, Ramirez reported on her Twitter account.

Earlier this week, the Dean of the Court of First Instance in Port au Prince, Bernard Saint-Vil, said a “very competent” judge had been appointed to lead the investigation into the assassination of Moise.

Police say they have arrested 44 people, including 12 Haitian police officers and the 18 Colombians who were allegedly part of the commando team and two Americans of Haitian descent. The head of Moise’s security detail is among those detained in connection with the plot allegedly organized by a group of Haitians with foreign ties..