WASHINGTON, D.C. -The Caribbean Community (CARICOM) Friday called on the global community to respond “swiftly and meaningfully” to the situation in Haiti, where an earthquake last Saturday killed more 2, 100 people, injuring thousands and several others missing and feared dead. 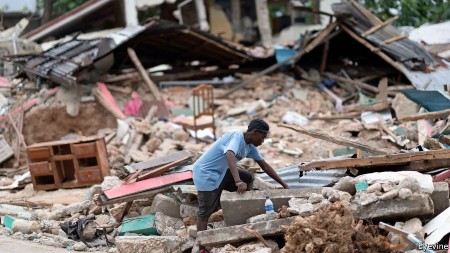 “There is an urgent need for the entire global community to respond swiftly and meaningfully to the dire situation of the Haitian people within a framework of transparency and accountability,” Antigua and Barbuda’s Ambassador to the Organization of American States (OAS) said at the meeting of the Permanent Council.

Sir Ronald, speaking on behalf of the 15-member regional integration grouping, said “we in CARICOM, urge international development and finance institutions and governments to help to the fullest extent of their capabilities, making sure that assistance is provided to the needy and vulnerable in a fair and equitable manner””.

The Barbados-based Caribbean Disaster Emergency Management Agency (CDEMA), which is coordinating CARICOM’s response to the situation in Haiti, said in its latest bulletin that 2,189 persons had dead, 12, 268 others injured and 332 missing as a result of the quake, which while not as devastating as the 2010 earthquake, which killed more than 200,000 people, flattened several buildings, including churches and hotels.

“Taking into account the assessments already carried out, at least 650,000 people need emergency humanitarian assistance in the South, Grand’Anse and Nippes. This represents about 40 per cent of the population of these three departments, which is 1.6 million people,” the CDEMA said, adding that the priority items are priority items are: water, tarpaulin, food, medical assistance and sanitary kits.

“Shelter assistance is an immediate need. The country is still experiencing aftershocks and can for some time, which will inevitably prevent persons from returning to their homes. Two buildings collapsed as a result of aftershocks.

“Due to infrastructural damage, there are no shelters and “Assembly Points” are being used.

Sir Ronald, who is also the Chair of the CARICOM group at the OAS, spoke after the members of the Council had heard from Haiti’s Prime Minister, Ariel Henry, who gave an account of conditions on the French-speaking CARICOM country.

“We are greatly troubled that the misery caused by this disaster was intensified by tropical storm, Grace, which generated widespread flooding and landslides,” Sir Ronald said.

“When this double calamity occurred over the last few days in Haiti, the country was already confronting a humanitarian crisis, including a grave strain on its medical facilities that were overwhelmed by several essential demands, including coping with the COVID-19 pandemic”.

The Antigua and Barbuda diplomat outlined steps that CARICOM has already taken to aid Haiti.  He disclosed that the Caribbean Catastrophe Risk Insurance Facility (CCRIF) agreed to pay out US$40 million to Haiti with the first instalment of $15 million being paid to the government early next week, and the remaining $25 million being delivered within the next 14-days.

He also stated that “it is significant that this current payment to Haiti represents the largest one-time payment from CCRIF to date.  It should also be noted that, since its inception in 2007, CCRIF has made five payments to Haiti, in the sum of $78.3 million or 32 per cent, the largest single portion of the benefits paid out to its 22 subscribing states”.

Ambassador Sanders said also that the Barbados-based Caribbean Development Bank (CDB) has given support to Haiti by paying, in whole or in part, Haiti’s insurance premiums for earthquakes, tropical cyclones, and excessive precipitation.

The OAS Permanent Council was also informed that CDEMA is deploying a team to provide operational support to the National Emergency Operations Centre in Port-Au-Prince, and that several organs of CDEMA are alert and activated, awaiting indications from Haitian authorities that they are ready to receive teams of specialist relief groups.

“CARICOM is doing all in its power with its limited resources to respond to the crucial emergency needs of the Haitian people”, Sir Ronald said, calling on the international development and financial banks and wealthy governments “to turn words to action.

“The Haitian people have suffered enough,” he added.