PARAMARIBO, Suriname – The Association of Surinamese Journalists (ASJ) has called for protection to be provided for media worker Jason Pinas, after two hand grenades taped together were found under a car parked at his home on Thursday morning. 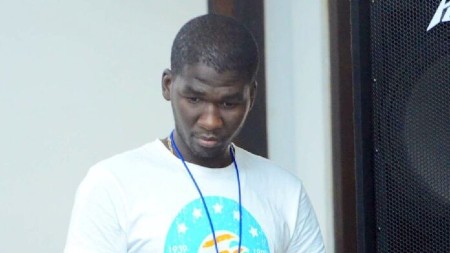 Journalist Jason PinasPinas, who was recently assaulted by security officers of Surinamese vice president Ronnie Brunswijk, was said to be in shock but calm after the discovery of the weapons under his brother’s car in the yard of his residence in Wanica, located in the north of the country.

The ASJ condemned what it deemed “a brutal attack” on the life of one of its members, coming two weeks after Brunswijk’s security guards were involved in an altercation with Pinas.

Pinas had his phone forcibly taken by the security personnel when he went up to the Vice President’s car to take the photo outside the Parliament building. He said he was forced to the ground and had pain in his neck, head and arm after the incident.

Pinas had also clashed with Brunswijk earlier this year when the Vice President did not want to answer a question from him during a press conference.

“We immediately ask for protection for Jason,” the ASJ said, adding that President Chandrikapersad Santokhi had made contact with its head, Carla Boëtius, requesting a meeting on Thursday afternoon.

The discovery of the grenades come a day after the ASJ demanded a full investigation into Pinas’ assault, expressing concern that Brunswijk’s bodyguards had not been held in police custody. The association said the Attorney General had indicated that because Pinas had no physical injuries, his alleged assailants were allowed to go home.

“What happened this morning was the implication that we were right. The investigation should continue and that is why the ASJ hired an attorney to proceed with the case,” it said. “As of this moment we can only assume that people related to the vice president are responsible but we have no proof. We are awaiting what the government will do about this now. We will know more after the meeting with president Santokhi.”

Meantime, the Association of Caribbean Mediaworkers (ACM) has requested an update and said it stands in solidarity with its colleagues in Suriname.