BRIDGETOWN, Barbados – Barbados and Kenya have signed three major agreements, including two related to air travel and trade between the two countries. 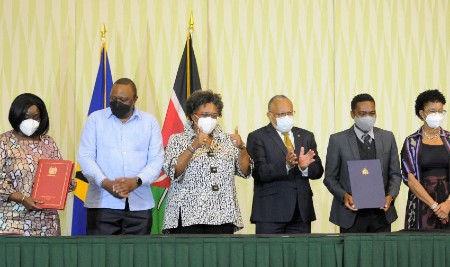 From left to right: Kenya’s Minister of Foreign Affairs, Raychelle Omamo; Kenya’s President Uhuru Kenyatta; Prime Minister Mia Amor Mottley; Minister of Foreign Affairs and Foreign Trade, Senator Dr. Jerome Walcott; Minister of the Environment and National Beautification, Adrian Forde; and Minister of Tourism and International Transport, Senator Lisa Cummins, at the signing ceremony.The Air Services Agreement, a Memorandum of Understanding in the Establishment of a Joint Committee on Trade Investment, and a Memorandum of Understanding in the Development of the National Botanical Garden were signed on Wednesday evening.

Barbados’ Prime Minister Mia Mottley emphasized the importance of the Air Services Agreement, saying that the absence of direct air and maritime transport between Africa and the Caribbean must be a “historic omission”, which the officials had a solemn and moral obligation to correct.

“I hope that after the Air Services Agreement is signed…, we will be in a position to do the substantive work now of unlocking that air travel that we also want badly to happen across East Africa, West Africa, the Caribbean and other areas in the Americas,” she said, before the signing.

“If we do not seize the moment, as we are trying to do now, then we will forever be victims of a time and a power over which we have no control.”

During his remarks, Kenyan President Uhuru Kenyatta underscored the importance of strengthening people-to-people relationships between Africa and the Caribbean.

“We have also sought to deepen our people-to-people exchanges and there can be no better way than what is happening here today….

“Despite the fact that we may work towards the strengthening of our bilateral arrangements or diplomatic arrangements, it is…the people…of our two countries, who can turn those good relations into trade relations, into profitable and meaningful relationships that continue to cement the work that we are trying to do at the diplomatic or at the governmental level,” he said.

Kenyatta added that he would be following up with his delegation to get a better understanding of the progress made during the trade mission to Barbados, to ascertain what his Government could do to facilitate Barbados in being able to “move that much faster and more effectively in cementing these partnerships”.

He thanked Mottley for re-establishing relations with Kenya.

“I want to thank you, in particular, and your Government, for the manner in which you personally have pushed for this revival of the Pan-African spirit, … recognizing that we are stronger, working on these (areas) together,” he stated.

President Kenyatta said he was pleased that the inaugural African-CARICOM Summit took place last month, and expressed hope that the meeting would be held either annually or biannually.