BRIDGETOWN, Barbados – The Barbados government Friday said the island has not “descended into a state of chaos” dismissing comparisons to it being described as the “a wild, wild west” following a spate of killings over the past week. 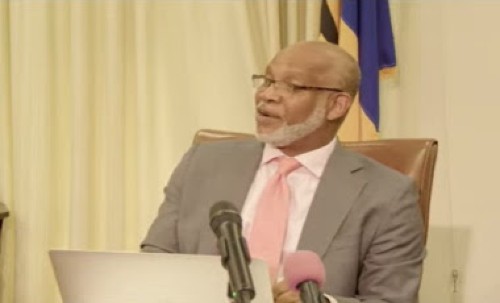 “There are no three-point plans, and there are no immediate solutions to turn this thing around. It requires a steady hand, it requires a long term commitment,” he said, adding that for those individuals who believe that there would be an “immediate elimination that is far from the case”.

“He told reporters that the country has experienced a spike in a number of firearm events or incidents over a few weeks, resulting in a number of deaths and injuries.

“Other incidents not connected to the use of firearms but also resulting in the loss of life have also occurred. These are all tragic circumstances and acutely felt in a small country such as ours….,” Marshall told reporters.

On Thursday, in the latest incident, a 47-year-old man was shot and killed and five others injured and on Wednesday, a man was stabbed and ran to the Central Police Station where he collapsed.

“This is not an indication that Barbados has descended into a state of chaos or outright lawlessness. We have dealt with spikes in crime before and effectively so,” Marshall said, announcing a new security strategy designed to stop a “worrying” influx of illegal guns into the country.

He said that part of the strategy is to deal with the countries from where these weapons are coming, adding “we have settled on an MOU (Memorandum of Understanding) with certain specialized United States agencies to do a number of things which will assist in our mutual ability to deal with the illegal      trafficking of firearms.

“We are intent that we are put in a position that we are better able to deal with those things in a cross border way. We are also going to be, as a result of that MOU, looking at increased training of our Customs officers,” Marshall said, noting that the authorities are aware of the resourcefulness of the criminal element who are able to disassemble the guns and ship them in multiple ways.

He said local authorities will be equipping the border security officials to be able to identify those methods and act on them.

“What is important to us is to make sure that our officers, our border protection agencies are fully able to spot them when they see them,” he  said, adding that that the Police Commissioner had signed the MOU which is now in the hands of the US Embassy here in Barbados.

But he noted that so far this year, the island had recorded 17 murders with 12 involving the use of firearms. During the period 2017 to 2022, police recovered 465 firearms.

Marshall said that the Mia Mottley administration since coming to office in 2018, has “spent considerable amount of resources” to strengthen detection at the ports of entry and to address coastal surveillance.

“There has been a period in the past where these assets have not been in working order and have not been in working order for extended periods of time, in some instances well over a year. Now, if our ability to detect firearms coming into Barbados is significantly hampered because assets are out of use for a year and a half, you can only imagine what number of guns could have come in at that time,” Marshall added.

He told reporters that “in those circumstances therefore it has a been a challenge for our law enforcement agencies.

“At our ports of entry, our guard was significantly down,” he said, noting that a significant amount of funds had been spent on fixing the issue.

Marshall has also warned that the authorities would be adopting a zero-tolerance approach to threats made to the general public.

“Your numbers are few, the people of Barbados are many. You cannot and will not win. You will not be allowed to drive Barbadians into their homes and away from their normal pursuits out of some fear that you have our streets and our communities hijacked with guns.

Police Commissioner, Richard Boyce, who was also present at the news conference, said that firearm-enabled violence will not be tolerated.

“I want to re-emphasize the message that wherever those guns are, the Barbados Police Service will be out and about taking those weapons out of those persons’ hands,” said the police chief.

“That is my first carrying call to persons, especially those young persons between the age of 19 and 35 who are hell bent on committing that sort of fear in a person’s mind,” said Boyce.