BRIDGETOWN, Barbados,  CMC –  The chief economist at the World Bank for Latin America and the Caribbean, Martín Rama, Friday said while there may be a need for solutions out of the crisis caused by the coronavirus (COVID-19) pandemic, he does not share the view that Caribbean countries should only seriously consider debt relief as one of the solutions. 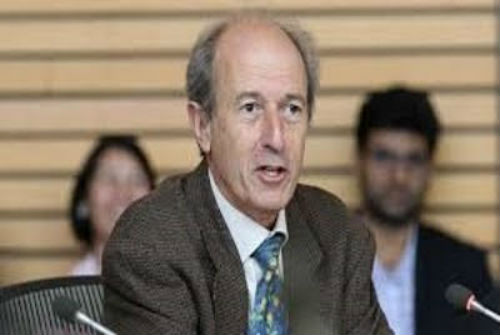 World Bank Chief economist for Latin America and the Caribbean, Martin Rama (File Photo)At least one regional leader has touted the need for a Marshall Plan type for the region and Caribbean countries have in the past criticized the criteria used to grant prudential concessions on financing to them by the developed countries and international financial institutions.

“I think there is realization out of this crisis we may need solution…that have to do with debt and there are a lot of conversations about that,” Rama told regional journalists during a webinar ahead of the release of a World bank report that notes Latin America and the Caribbean (LAC) will require a combination of public health measures and economic management to deal with the impact of the virus.

“We already under stress, Argentina and Ecuador did a restructuring of their debt, but perhaps things are more orderly can be thought through especially the poorest countries and you saw already there is a problem of suspension of the finance for several of the countries that we pout into the low income bracket.

“Caribbean islands tend not to fall into that low income bracket that is the one getting the priority …maybe 20 something years ago there was an initiative for the highly indebted countries for debt relief in exchange for a clear path to fiscal sustainability.

“Many of the Caribbean countries are among the richest in the region, so the case will perhaps be more difficult to make. On the other hand they tend to be countries that are very dependent on the sector that has suffered the most from the crisis which is tourism”.

But the chief economist argued that because the regional countries are “not big in terms of debt” he would not rule out debt relief, “but I don’t think I will bet on it.

“So I think in the medium term agenda, the kind of skills that are needed, the kind of support…like how Alibaba in China organized thousands of villages just to work through the internet and take advantage of whatever they do well,” he said. Stressing the need to focus on that area “and hope for some form of debt relief, but don’t count on it.

But he said that while he sense there may be goodwill by international financial organizations and even countries to provide some form of debt relief “I will not bet on it happening because Caribbean countries are relatively rich in the developing world.

Rama said despite the pandemic, remittances to Latin America and the Caribbean have increased, noting that most migrants from the region work in the United States.

“Many of them work in construction, in small retail, grocery stores those activities will be considered essential and would continue going,” he said, adding that “many of the migrants did not lose their jobs in the US”.

He said in addition, the US had put in place programs of social transfer “on a gigantic scale “and for the migrants that are legal they got welfare cheques.

“And the third reason is I think, migrants are parts of families and it is normal I guess in a family where the side that is coping better will help the side that is going through other troubles,. So even if the migrants in the US were doing the same as before, you will expect them to help more and so you combine the three things it is not totally surprising to see increases of 15 per cent or more compared to the same period last year”.

He said a saving grace for the Caribbean is that “remittances have held much better than expected. Six months ago we were all anticipating a big decline in remittances. It happened at the beginning, but by now remittances are quite consistently much high or substantially higher than the same period a year ago for countries like Haiti, Jamaica and others that’s very good news”.

The World Bank economist said regarding the oil producing countries in the Caribbean, while he did not have official figures for Trinidad and Tobago, the Washington-based financial institution is predicting economic growth of 33 .2 per cent for Guyana “which will make it the world record in terms of growth, it is much less than where we anticipated a year ag.

“But still, I think the challenge for Guyana will be how to manage that and how to make the most of it. For Suriname, I think it is still too new, we don’t have it impacting. The figures for 2020 for Suriname is minus 13 per cent which is very much the range that we see in the Caribbean.

“Overall what I would say is that oil and gas prices have been important casualties from this crisis, but the problems come from before. The problem come from what is called the oil glut…new fracking shale techniques have changed it completely…and at some point the kind of cartel arrangements were keeping the price going.

”We are not strong enough to cope with that, he said, adding that the marginal price of oil in the new environment is anything between US$40 and US$50 “and these supplies can be put in place very quickly, because it is relatively very low investment.

“Of course, one can go wrong, but it is difficult to foresee that we will go to the bonanza of a few years ago. What happened to many oil exporting countries…in the region is that it is relatively easy to adjust upwards when there is money, you establish social programs, invest in infrastructure, but then if you did not save enough when prices go down that creates a fiscal crisis and also a political crisis because nobody wants to be the loser.

“So what I would say is that oil prices will probably recover from the rock bottom here they were a few months ago, but I will not count on them going very high,” Rama told reporters.

Ahead of the release of the report, titled ““The Cost of Staying Healthy,” the Washington-based financial institution said the economies of the region are suffering from lower foreign demand, increased economic uncertainty, a collapse of tourism and the consequences of months under lockdown to try to contain the spread of the disease.

The report also notes that with the pandemic expected to continue for an extended period, health care systems should consider reforms to improve effectiveness and reduce the costs borne by governments and individuals.

In addition, governments will need to find paths back to fiscal consolidation after this necessary period of high spending on economic stimulus and emergency social transfers, according to the report.