In a sea of White male members, he stands out mainly because of his race and skin color. 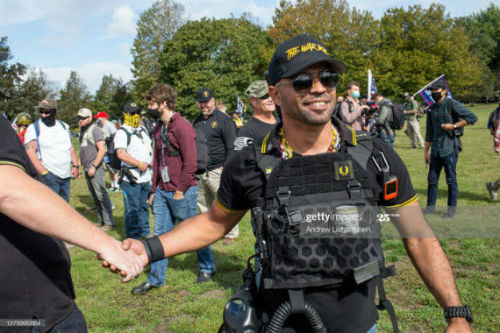 “Proud Boys, stand back and stand by,” Trump responded, to the shock of millions and to the glee of the group’s members.

Tarrio, 36, an entrepreneur, took over the leadership from Proud Boys founder Gavin McInnes on November 21, 2018. On Tuesday night, he signaled his fealty to Trump, after the President referred to Aaron Jay Danielson, a Proud Boys supporter who was killed during an August 29, 2020, confrontation in Portland, Oregon. Tarrio posted on Parler, “That’s my president!” and “Standing by sir,” as the group shot to international fame with search results on the group growing and social mentions and media coverage skyrocketing.

But the Southern Poverty Law Center deems it a hate group noting that its leaders “… regularly spout white nationalist memes and maintain affiliations with known extremists (and) are known for anti-Muslim and misogynistic rhetoric.”

Tarrio lives in Miami and was raised in a Cuban family in Little Havana in Miami. He was the Afro-Cuban president of the Miami chapter of the group and worked with and also serves as the Florida director of Latinos for Trump.

Tarrio ran for the U.S. House of Representatives in 2020 as a Republican and then dropped out of the primary after raising only about $10,000 for Florida’s 27th congressional district, held by Democrat Donna Shalala. The district takes in the city of Miami and Miami Beach and includes Little Havana where he grew up.

Tarrio also developed a personal friendship Donald Trump’s closest confidant Roger Stone, who is also a member of the Proud Boys a resident of Southern Florida. Tarrio told Insider that he considered about 22,000 men around the world to be members and that at least 30 of them were running in this year’s elections.

He has been a supporter of Ron DeSantis, the current governor of Florida as well as Senator Rick Scott. Tarrio told Heavy that under his leadership the group will “not change what we do.” He adds, “We’re just, basically, a group of guys that hang out and drink beer together and just have a good time. Obviously, we’re a political group but that’s secondary in nature. We just enjoy our time with our brotherhood.” Tarrio went on to say that the group would continue in the same direction by following a new set of by-laws.