History was made on September 17, 2020 in Suriname and Guyana, as for the first time, a US Secretary of State visited both countries. 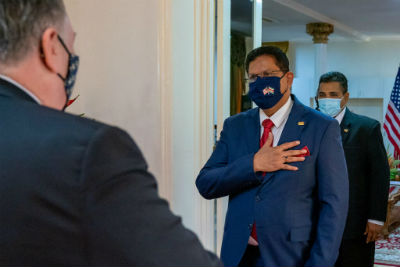 Pompeo is greeted by new president of Suriname, Chan Santokhi on Sept. 17, 2020. (Twitter image/Sec. Pompeo)Mike Pompeo touched down in both CARICOM South American nations in September, with a promise to strengthen bilateral agreements.

In Paramaribo, he met with new President Chan Santokhi as well as Foreign Minister Albert Ramdin and said he discussed collaboration on security to align “efforts for the mutual benefit of the Caribbean region”  as well as  ways “to improve democratic governance, promote transparent investment, and achieve sustainable growth.”

He also met with US companies there and reaffirmed that “U.S. investment benefits both of our countries.”

“American businesses bring transparency and respect for the rule of law, and Suriname’s natural resources offer a great opportunity to reinvest in its people,” Pompeo posted on Twitter.

At a press conference between the President and the US Secretary, Pompeo said his “visit is the sign of our growing ties between our two nations.”

“This visit is also a sign of growth in the ties between the United States and the Caribbean that I spoke about in Jamaica, back in January of this year. We are serious about this effort, and I saw today that you are, too,” he added. 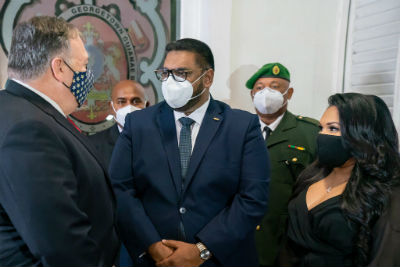 Asked about his reason for being there and if it had anything to do with Venezuela, the US Secretary of State simply that the US has made it clear where it stands on Venezuela but he was in Suriname to  extend the US’ hand of partnership and offer assistance for security.

Asked also if there is a competition between the United States and China in Suriname and more broadly in the region, Pompeo said the US has watched China “often show up in ways that are inconsistent with the value set that I’ve heard the president speak about …. and so what we want is open, transparent processes, we want good value for the people of Suriname, we want jobs for the people of Suriname, we want companies that come here to obey environmental rules in the way that American companies will do when they show up.”

The US Secretary then flew to Guyana where he was greeted by Foreign Minister Hugh Todd at the Cheddi Jagan International Airport. In a tweet, he said he looks “forward to working with the new democratically elected government to expand prosperity and security for our people.”

He was in the evening hosted by Guyana’s President Irfaan Ali at State House, Georgetown, where he said he  “…welcomed the opportunity to candidly discuss governance, citizen security, and leveraging Guyana’s wealth of natural resources to provide for its future.”