Cary, NC - The North Carolina Courage announced today the extension of Kristen Hamilton’s contract through 2022. The new deal adds a year to her current contract with an option for an additional year in 2022. Per club policy, no further details were disclosed. 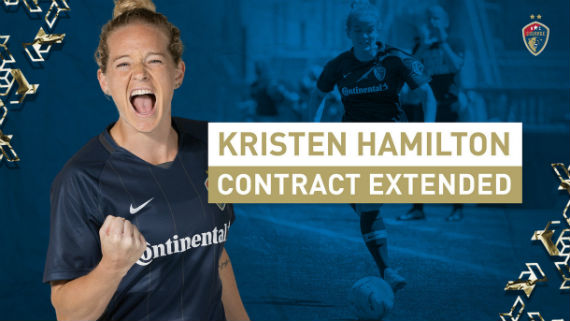 Hamilton will return for her fifth season with the North Carolina Courage and her eighth in the NWSL after being selected 36th overall in the 2014 NWSL College Draft.

“Hamilton’s evolution as a player has been phenomenal to watch,” said NC Courage head coach Paul Riley. “She has grown in just about every attacking category from finishing, to final ball, crossing, special awareness, turning, heading, and knowledge of the penalty box. She is stronger, quicker, better tactically, and more composed in front of goal.”

Most recently Hamilton played 285 minutes of the NWSL Challenge Cup in Utah. She played in each of the NC Courage’s five matches and took seven shots.

Just shortly after returning from the Challenge Cup, Hamilton was voted the Julie Dolan Medal winner, an award given to the top player in the W-League. During the NWSL offseason, the Colorado native traveled to play in Australia’s top-division women’s soccer league for the Western Sydney Wanderers. Her stellar season-long performance of seven goals and two assists with the team earned her the prestigious medal.

During the 2019 season, Hamilton had a breakout year, scoring nine goals and assisting five. In one match, the forward netted four goals, and another she recorded a hat trick. Hamilton saw her minutes jump from in 796 in 2018 to 1,352 in 2019. On September 4, 2019, Hamilton made her debut with the US Women’s National Team at age 27.

“It really has been a meteoric rise and we are delighted she is back with the team,” Riley said. “Her hunger and desire to improve make our environment a perfect match. We know she wants the final step to the USWNT and we believe playing in Courage Country will give her that opportunity.”