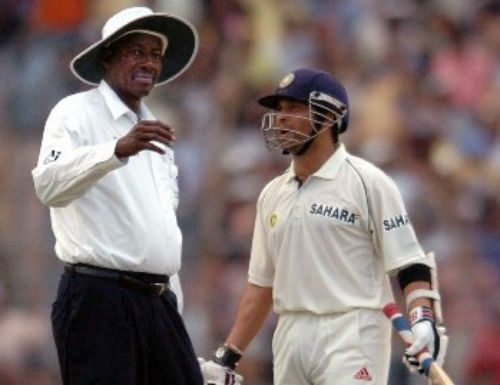 Bucknor, left, listens to Tendulkar during the 2005 Eden Gardens Test.Now Bucknor is endorsing the International Cricket Council’s (ICC) use of technology in officiating, urging others who still doubt that move to do the same.

“Now, thinking about when I was umpiring and the mistake was made out there and I gave a batsman out who was not out and realizing I had made a mistake, it took me a long time to fall asleep that night,” he told told Starcom Radio’s Mason and Guest last month.

“Now you can fall asleep quickly because the correct decision is eventually given and once that decision is given, I’ve made a mistake but the correct thing was done later on and the batsman would’ve continued his innings.”

The introduction of technology has enhanced the officiating of the game, Bucknor believes.

“I am not certain if it (technology) is affecting the confidence of umpires, but I know it has improved umpiring,” said Bucknor, who stood in 128 Tests and 181 one-day internationals before retiring 11 years ago.

“So we learn from technology and the umpires who do not enjoy having technology around I would hope they would re-think because technology is good for the game.”

The umpire Decision Review System (DRS) was introduced on a trial basis 11 years ago. By then Bucknor had retired as an umpire. Designed to enhance officiating, the DRS has attracted much controversy, and the ICC has continued to tinker with the system since its subsequent full introduction in an attempt to enhance its effectiveness.

Under the current regulations, batting and fielding teams are allowed to review dubious umpiring decisions at least twice per innings. Technology such as “snicko", which uses sound to determine edges and “hotspot”, which utilizes imaging to also determine edges, have also been introduced by the ICC.

Bucknor said the level of the current technology allowed officials the luxury of correcting mistakes in real time.

“What it does is if you make a mistake, the mistake can be corrected on the field,” Bucknor said.

Bucknor twice infamously gave India’s legendary batsman Sachin Tendulkar out when the replays showed the decision to be incorrect.

The first incident was a leg before wicket decision at Brisbane, Australia on India’s 2003 tour. The second was a catch at the wicket two years later against Pakistan in Kolkata.

“It is human to err and Tendulkar was given out on two different occasions … these were mistakes,” Bucknor conceded.

“I don’t think any umpire would want to do the wrong thing. It lives with him and his future could be jeopardized.

“Once in Australia, I gave him out leg before wicket and the ball was going over the top. Another time in India it was caught behind when the ball deviated after (passing the) bat, but there was no touch on the bat.