Two players with Caribbean connections could be rookies on teams rosters in the National Football League (NFL) this season. 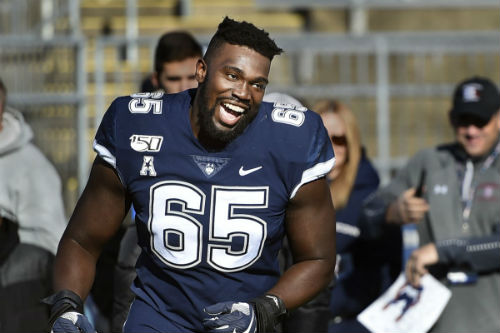 The Cincinnati Bengals also signed Bermudian Devwah Whaley, a running back who represented the University of Arkansas.

Peart, 22 and originally from Kingston, attended Governor’s Academy in Massachusetts. The 6’ 7”, 318-pound lineman was selected in the third round, 99th overall. He appeared enthusiastic to join the New York team.

“Just watching them on the TV,” he told the team’s website, “just the culture and everything the Giants stand for was something that was appealing for me as a young kid.”

The 22-year-old Whaley was not selected in last month’s draft, but was picked up as an unrestricted free agent and could take to the field with Joe Burrow, the Heisman Trophy winner and number one overall selection, if he makes the final roster cut.

Whaley endured two largely injury-affected seasons in his junior and senior years with the Razorbacks, the worst team in the power-packed Southeastern Conference in 2019 with a 2-10 overall record. He was mostly used as a blocking back and for short-yardage plays and had only 69 carries for 278 yards with four touchdowns in 2019. Whaley also caught 16 passes out of the backfield for 141 yards.

The Bengals struggled too and was the worst team in the NFL last season with a 2-14 record.