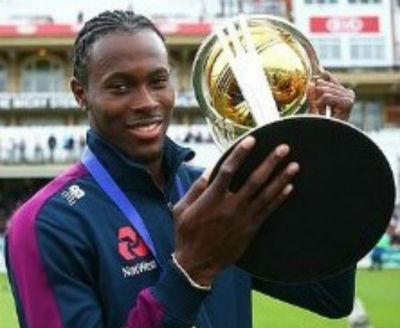 “Archer” Barbadian Jofra Archer, a fast bowler who plays for England, was named among Wisden’s five “Cricketers-of-the-Year”. Archer, 25, made his international debut in 2019, helping England win the 50 overs World Cup and the Ashes Test series against Australia.

Archer was born and raised in Barbados. He qualified to represent England through his father. He represented the West Indies at youth level, but chose to play for England in 2019.

He took 20 wickets at 23 runs each to help England win the World Cup, bowling the super-over to beat New Zealand in the final. In the Ashes series, Archer took 22 wickets at 20 runs apiece as England drew the series 2-2 to retain the urn.

Three Australians are also in that category, including Marnus Labuschagne, Pat Cummins and Ellyse Perry, along with Simon Harmer of South Africa.

Meanwhile, Andre Russell of Jamaica was voted Twenty20 “Player-of-the-Year” while representing the West Indies in the shortest form of the game.