DOHA, Qatar - Bahamian competitors at the 2019 IAAF World Championships in Athletics (WCA) here embraced the heavy responsibility of lifting the bruised spirits in their storm-battered homeland and the global track and field fraternity rallied alongside them. 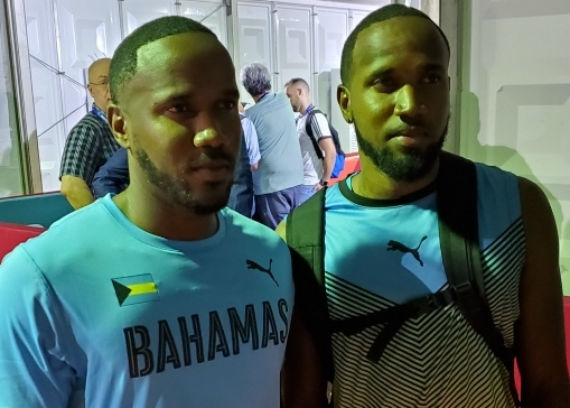 Lotharo Collie-Minns, left, and his twin Lathone, believe the WCA is about inspiring compatriots.Despite the devastation inflicted on The Bahamas by Hurricane Dorian Sept. 1, which up to press time had left more than 50 dead, hundreds missing and homeless, plus millions of dollars in property damage, the Caribbean nation’s team arrived at the WCA late last month determined not only to win medals, but also put a smile on the faces of their compatriots.

“It (the hurricane) was devastating,” admitted Bahamian athlete Latario Collie-Minns.

“We came here as a team to try and uplift the country, to try and shed some light. That’s our main goal at the World Championships … even though the country is going through so much right now.”

The performances of Collie-Minns and his brother Lathone were not good enough to advance the identical twins from the first round of the triple jump on Sept. 27, the first of the 10-day WCA, this year’s premier track and field meet. Yet they warmed to their additional role of trying to inspire their weather-beaten compatriots.

“Whenever we face devastation we’ve always gotta be strong, no matter what,” said Lathone who, along with his brother lives and trains in The Bahamas but were not directly hit by the hurricane.

“…I really wanted to put on a show and get in the finals, just to uplift their spirits, but we have other great athletes coming right behind. They can still lift up the spirit, you know.”

Athletes and track supporters from around the world, fully aware of the massive destruction caused by the worst storm ever to hit the Caribbean nation, chimed in with messages of hope and encouragement for The Bahamas.

“I wish them the best,” said United States sprinter Mike Rogers, who has friends and training partners from The Bahamas.

“I hope they can get things back up and running … If anybody can do anything, please give back to The Bahamas. Please give prayers to their families and friends.”

Caribbean representatives also showed love for their regional siblings, with athletes claiming The Bahamas’s tragedy was an active topic of discussion leading up to the WCA.

“Definitely, before we even came here,” said Jamaica middle distance runner Natoya Goule. “(Bahamas runner) Shaunae Miller (Uibo), she’s my friend. Basically all the persons on The Bahamas team are my friends, and when I heard about what happened it actually affected me. I felt really bad and also knowing that I have family that live in The Bahamas.”

Despite being eliminated in the heats of the 100 meters, Antigua and Barbuda’s Cejhae Greene appeared even more upset by the tragedy in The Bahamas.

“For me personally, that hit me a little bit hard because, for one, my training partner Warren Fraser is from Bahamas,” said Greene. “So is his family. Also Alonso Russell (another athlete) … he’s from The Bahamas.”

Most of the athletes who represented The Bahamas here live and train in the U.S. and were not directly affected by the hurricane. Among the exceptions was Terrence Jones, a sprinter from Grand Bahama which, along with Abaco, were the areas hardest hit by Dorian. The 2019 WCA was the teenager’s first major championships but, sources said, he was determined to compete and help inspire his nation.

However, he would have to share that challenge with teammates such as Shaunae Miller-Uibo, the reigning Olympic Games 400 meters champion and The Bahamas’s best hope for a gold medal at the WCA.

“She would like to do nothing better than to lift the spirits of our people,” explained Bahamian journalist Brent Stubbs.

“She even has a contingency of people who came down (to Doha) to support her. That’s how serious she is.”