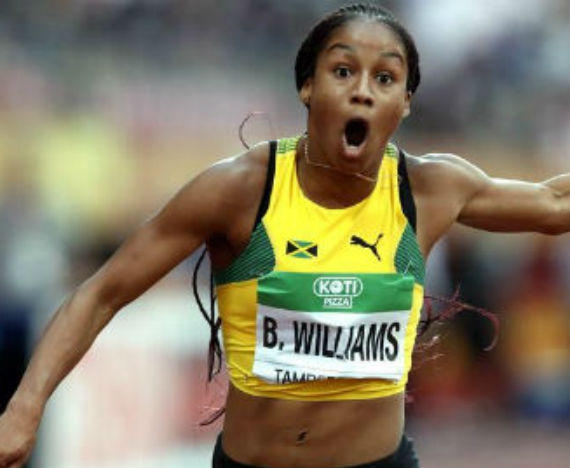 “Williams”Williams, 17, who was born in the United States but eligible to represent Jamaica through family connections, tested positive for hydrochlorothiazide at Jamaica’s senior national trials in June where she finished third in the 100 meters booking a spot in the event at the WCA, plus possible inclusion in Jamaica’s 4x100 meters relay team.

But the doping test result cast immediate doubts over her participation. Williams, who is coached by former Trinidad and Tobago sprinter Ato Boldon, was selected provisionally to the WCA team by the Jamaica Athletics Administrative Association. Following a hearing by the Independent Anti-Doping Disciplinary Panel (IADP) in Jamaica last month, Williams was given a reprimand, but allowed to compete at the WCA.

However, Williams, who has dominated youth level sprinting in the Caribbean and globally and was gearing up for her first major senior international competition, announced on social media she would not run at the WCA, which began Sept. 27.

“I have decided to forgo competing at the World Championships considering the long trip to Doha and that the team has already started training for the relays,” Williams stated on Sept. 26.

However, despite the IADP ruling, there appeared to be some controversy over whether or not Williams was eligible to compete here following the doping test result. According to Section 9 of the 2019 IAAF Anti-Doping Rules, “An Anti-Doping Rule Violation in connection with an In-Competition test automatically leads to Disqualification of the Athlete’s individual results obtained in that Event … In addition, further results obtained by the Athlete in other Events may be Disqualified …”