DOHA, Qatar - Athletes representing the Caribbean took a rollercoaster path in their hunt for medals as the IAAF World Championships in Athletics (WCA) unfolded here. 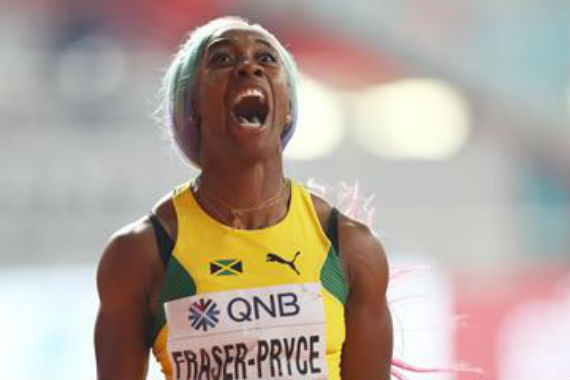 Fraser-Pryce More than half-way through the WCA the region, led by Jamaica, had survived extreme heat, doubts, injuries and mishaps to win five medals, including two gold, two silver and a bronze.

However, up to press time after Day 6 of the 10-day meet, which began Sept. 27, the Caribbean appeared poised to win more.

Athletes and fans battled roasting outside temperatures during the championships, although the Khalifa International Stadium, where almost all the events were staged, served up cooler climes but disappointing crowds.

The Caribbean got its medal haul going on Day 2 when Gayle jumped 8.69 meters, a national record, to become world champion.

In Fraser-Pryce’s first major global meet since her son’s birth in 2017, the 32-year-old captured the hearts of fans globally, blasting out of the blocks to win in a world leading time of 10.71 seconds.

“It took a lot of hard work and sacrifice to get to this point,” Fraser-Pryce said while explaining her journey from being “a wreck,” after learning she was pregnant with Zyon, to becoming the world’s fastest woman.

“A lot of persons said I should retire, and do it gracefully and I was like ‘O.K., that’s what you think’,” Fraser-Pryce said after her fourth WCA title. “… It’s a win for mothers.”

Jamaica also earned silver in the 4x400 mixed relay and the men’s discus. The relay was won by the United States in world record time of three minutes 9.34 seconds. Jamaica’s 3:11.78 for second was a national record.