LAUDERHILL, Florida - The West Indies men’s teams are struggling in all forms of cricket, but the players are urging fans of the Caribbean ambassadors to remain loyal and patient, vowing to propel the former kingpins back to the pinnacle of the global game. 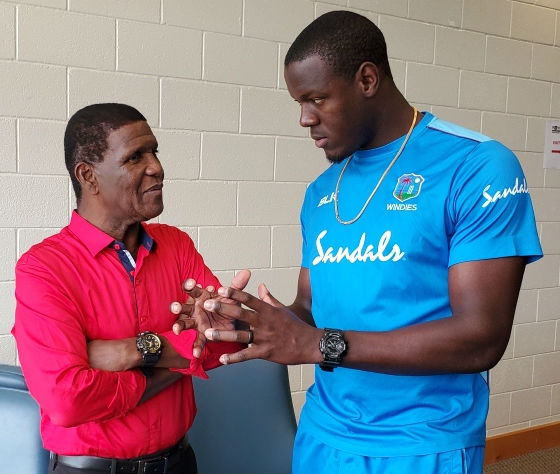 Brathwaite, right, has a talk with Rowe in Florida. Photograph by Gordon Williams.The latest results have been disappointing. The West Indies lost two series in the shortest formats of the game to India last month. India was dominant in a 3-0 whitewash of a Twenty20 series, which featured two games here. The visitors then blanked West Indies 2-0 in a three-match one-day international series (ODI) in the Caribbean. The other game was rained out.

Those results continued a disappointing run, which also included a loss in the first Test against India last month and the West Indies’ early elimination from the World Cup in England this summer. Yet the West Indies players insist they are proud to represent the Caribbean and are doing all they can to win for its people.

“They want to play for the West Indies. We understand the responsibility that we have to the people in the region and, as such, every time we go out there we try to give our best.”

It’s just not been good enough lately. Despite being the reigning world champion for T20 - 20 overs - cricket, the West Indies is currently ranked well outside the world’s top five in the shortest form of the game. Same is also true for ODIs - 50 overs - and Test cricket, the longest format. The players said they understand the fans’ frustration and willingly accept blame, although it can hurt.

“I guess sometimes it’s painful to hear that the guys don’t give their all or they’re not interested in playing for the West Indies or they don’t work hard.”

Brathwaite urged fans to be patient, despite being long separated from a past when West Indies ruled world cricket.

“I fully understand how the cricket fans of the West Indies feel,” he said. “But it’s a long process.

Brathwaite was adamant the players are putting in the work needed to succeed, despite reports that players have failed fitness tests.

“I can vouch for the players that we are working hard … players do work hard,” he said. “ … However, we don’t always see it materialize on the field and it can be disheartening for fans.

“But I just want to say to the fans, continue to rally. The players are trying and we have full confidence that we’ll get back to where we need to be.”

Brathwaite admitted the West Indies has underperformed, despite players’ being paid better than the past, having access to improved training facilities and being able to play more cricket. Those factors, he explained, can prove a double-edged sword.

“The opposition is also playing more cricket,” Brathwaite said. “They’re also earning a lot more than we’re earning … It’s probably a Catch-22. The more cricket you play the better you should be.

“But it also means that if you get in a rut, the longer your bad patch is … So that’s not an excuse … The schedule being as hectic as it is, it can be a positive, but more often than not it can be a negative as well.”

He claimed the West Indies teams are trying everything possible to win consistently. That includes consulting past players. Brathwaite met with former West Indies batting star Lawrence Rowe while here. He later offered that the problems of West Indies’ cricket are multi-layered and can only be solved with a collective effort.

He wants Caribbean fans to believe a West Indies resurgence is not far away and to continue to support the teams.

“We can’t tell the fans to come out,”Brathwaite said. “But we can encourage the fans to trust our preparation, trust our hard work and to believe that we’ll get back to where we want to be, which is the top of world cricket in all three formats, preferably, and that they should join us on that journey.”