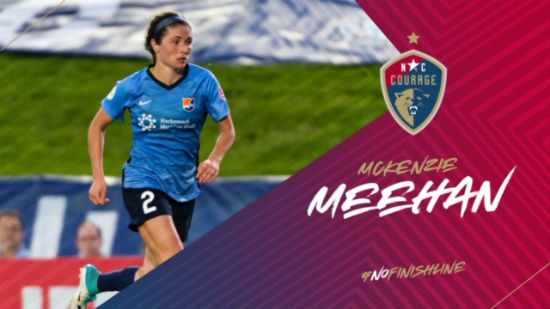 Meehan, a product of Boston College, was drafted in the 2017 NWSL College Draft by Sky Blue FC. Meehan made 17 appearances in her rookie season, playing 599 minutes. She then played 351 minutes in 2018 and has played 14 minutes so far in 2019.

“McKenzie is smart, coachable, and dependable with a nose for the goal,” said North Carolina Courage head coach Paul Riley. “I love getting players with a point to prove and we are excited to see what she can do in our environment. Hungry is a great trait and expectation is she will push immediately for a starting role.

Meehan has also spent time with the United States Youth National teams in her career at the U18, U20 and U23 levels. In 2014, she helped the United States qualify for the FIFA U20 Women’s World Cup scoring six goals at the 2014 CONCACAF Women’s U20 Championship, including a hattrick in a 10-0 rout of Guatemala. The six tallies earned her co-Golden Boot honors alongside Mexico’s Tanya Samarzich.

Eddy has played for NC Courage head coach, Paul Riley, since 2016 when she was with the Western New York Flash. She then relocated to Cary with the Courage in 2017. In three years with the club, Eddy has played 214 minutes in 10 appearances. She recently scored her first goal in a Courage uniform on May 19.

“Liz has been a big asset to our club,” said Riley. “We have enjoyed success together, but Liz wants to play fulltime and as a coach, I think it is important there is honesty and trust that we are here for the right reasons. Liz has given me everything, but I want her to continue to evolve and grow and sometimes that requires a change of scenery. We wish her continued success in her career and those great memories we have shared will have a lasting impact.”

Meehan will be available for selection this weekend as the North Carolina Courage take the field on Saturday, June 15 at 7:45 p.m. against the Portland Thorns as part of a North Carolina Football Club Pride Night doubleheader, presented by Credit Suisse. North Carolina FC will play the Swope Park Rangers at 5:00 p.m. in the first game. Click here to buy tickets or call the Coastal Credit Union Box Office at 919-459-8144 to speak with a ticket representative.