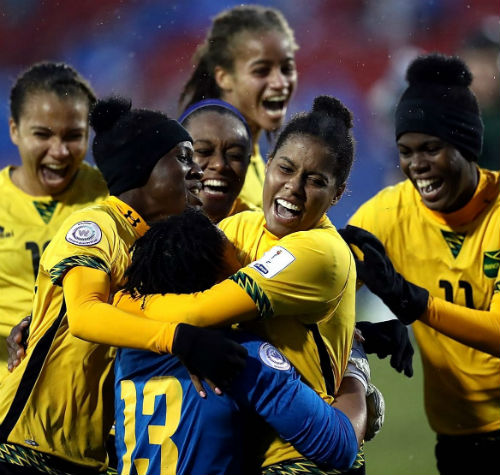 Jamaica, the first senior female team from the region to qualify for the game’s biggest tournament, will play in Group C alongside Brazil, Italy and Australia in France.

The Girlz, ranked 53rd by world soccer’s governing body FIFA, will face 10th ranked Brazil on June 9 in Grenoble, Italy (15th) in Reims on June 14, then return to Grenoble to play the Aussies (sixth) on June 18.

Six groups of four nations each will start the tournament, which officially kicks off June 7. After round robin play, the top two in each group will advance to a knockout stage. The final will be played on July 7.

Jamaica will be represented by several players and coaches based in the United States. Head coach Hue Menzies runs a soccer club in Florida. His assistant Lorne Donaldson operates in Colorado.

The team, nation and Jamaicans overseas have embraced the magnitude of its accomplishment and the opportunity to play in the World Cup.

“The country has really embraced the team. I think it’s the whole diaspora as well, because some of the players were born in the diaspora.”

The Girlz are confident they can excel on the field as well.The team played its final home warm-up game on May 19, a 3-1 victory over Panama in Kingston, and days later won a practice match 2-1 against club team F.C. Surge in Florida, where they also trained.

However, on May 28 Jamaica lost 3-2 to Scotland in another friendly before arriving in France.Of major concern in that game was a leg injury suffered by top striker Khadija Shaw, which forced her to leave the game after scoring both of Jamaica’s goals.

Yet, despite the enthusiasm and optimism of the team, the Girlz still struggle to find funding. Years ago Jamaica disbanded the women’s program. Even now, there have been glaring questions about the level of support from the JFF.A story published in the New York Times also painted an unflattering picture about the lack of financial support for the Girlz, including painstaking efforts to raise money. The JFF, however, has denied claims it has shortchanged the Girlz.

Still, the huge task of representing a nation and region has not escaped Jamaica’s team.

“The players also understand the significance of the achievement and recognize their responsibility as ambassadors of Jamaica,” said Wright.