South Florida-based sprinter Briana Williams was among the stars that helped Jamaica to again dominate the Carifta Games held last month in the Cayman Islands. Williams, a student at Oakland Park Northeast high school who is coached by former Trinidad and Tobago sprint great Ato Boldon, won the 100 and 200 meters in the girls Under-20. She won the 100 in 11.25 seconds and the 200 in a world leading age group time of 22.89. 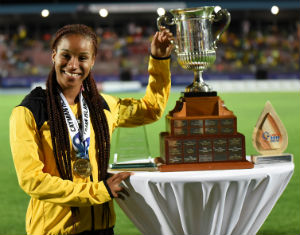 Williams was also a member of Jamaica’s victorious U-20 4x100 meters relay team, which helped her win the Austin Sealy Award, a trophy given to the meet’s most outstanding athlete, for the second year in a row.