Haworth to Captain Fury FC in 2019

OTTAWA - Ottawa Fury FC’s longest-serving member, Carl Haworth, will once again wear the captain’s armband, the club announced Monday, less than a week out from the 2019 USL Championship season kickoff. 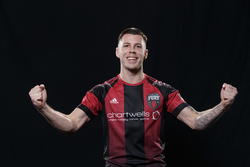 Haworth was the club’s first-ever Canadian signing back in 2013 and has since featured in 125 matches for Fury FC, scoring 16 goals and providing 15 crucial assists. As fit and determined as ever, Haworth, now in his sixth season with Ottawa, is on pace to surpass the 10,000-minute mark this season.

“A leader to me is somebody who’s doing the right things in every walk of life,” offered Haworth. “Doing the right things on and off the field at all time, regardless of if anyone is watching. Integrity is a big thing for me: I want to be the guy that leads by example and hopefully guys will pick up on that sort of stuff throughout the year and it will translate to the whole squad.”

While Haworth will be the one wearing the “C”, Fury FC will expect a full group of leaders on the pitch, in the locker room and in the community.

“I always expect to see 11 captains on the field, seven on the bench, and more in the stands. We all have to be captains for the club to be successful,” commented Fury FC Head Coach Nikola Popovic. “The one that wears the armband is a symbol of the club’s identity, he holds the flag of our culture, of what we believe, but a winning team needs to have a full group of captains.”

Ottawa Fury FC wrapped up its preseason camp this past Saturday and now shifts its focus to its 2019 USL Championship season opener this Saturday, March 9, as the club travels to Charleston to face the Battery (7:30 p.m.). After two matches on the road, Fury FC will return to TD Place on Saturday, April 6 to host Nashville SC (2 p.m.).

Fans can join the Fury FC Family right away by purchasing a season membership, or with the new Fury+ which gets them access to all regular season home matches for only $30 per month per seat! For more information on Fury+ and other season membership options and perks, visit OttawaFuryFC.com/Fury-plus