PLANTATION, Florida – The week of July 21-25 is declared the “Spirit of Aviation Week” and like all major events taking place during the COVID-19 pandemic, the 51st Annual Experimental Aircraft Association (EAA) Air Venture Show has pivoted to a virtual platform. The Bahamas, represented by its key government agencies including the Ministry of Tourism and Aviation, Royal Bahamas Police Force (aviation arm), Bahamas Civil Aviation and Bahamas Customs Department, along with its Flying Ambassadors, is  making its presence felt at the world’s largest aviation show. 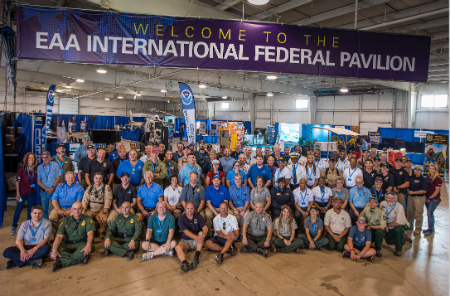 Bahamas Government and US Federal Agencies at 2019 EAA Air Venture Show, Oshkosh, Wisconsin. In the past, the show has annually attracted in excess of 500,000 pilots, aviation enthusiasts, and media and industry professionals from around the world and exhibited more than 10,000 airplanes, from home builds to warbirds.

The number one ranked destination in the Caribbean and Eastern Seaboard for general aviators, The Bahamas, with its more than sixty airports and 16 islands destination, has always been a favorite for private pilots and boaters.  Its safety and unspoiled beauty, pristine clear waters, mystique and tranquil environment have all added to the enjoyment and peace of mind of travelers.

The Bahamas reopened its borders to private pilots and private boaters on June 15, and to all international commercial flights on July 1.

On July 22, The Bahamas will close its borders to international commercial airlines and vessels originating from the United States of America. The borders will remain open to private charters, private pilots and private boaters embarking from the U.S. and for travelers on commercial airlines from Canada, the United Kingdom and European Union.  All travelers entering The Bahamas must present a negative COVID-19 RT-PCR (swab) test from a credible, reference lab, not more than 10 days old.  A completed Bahamas Health Visa Application must be made 24-48 hours, prior to embarkation, via www.bahamas.com/travelupdates.

The Islands of The Bahamas are located just 50 miles off the coast of Florida.  Earlier this year, the Bahamas government, in conjunction with the U.S. Federal government agencies, began pre-clearance global customs and immigration services for private pilots traveling to and from the United States to The Bahamas. The pre-clearance facilities make it easier, faster and less expensive for pilots to access the remote Out Islands of The Bahamas, to land and  make the return flight to the  United States. The new pre-clearance facilities are located at Banyan Air Services, at the Fort Lauderdale Executive Airport and Sheltair at the Fort Lauderdale Jet Center.

Among some of The Bahamas’ specials and incentives being offered to pilots at its booth at the EAA Air Venture Virtual Show via http://www.expocadweb.com/20eaa/ec/forms/attendee/vbooth5.aspx?exhibitorId=13054 are a $150 credit for hotel stays in the Out Islands of The Bahamas; a $300 fuel credit, dubbed Fly Almost Fee Free, for hotel stays of 4 nights or more at Out Island Promotion Board member hotels, and a Bahamas Flyaway $100 Avgas gift certificate at Odyssey Aviation, redeemable in Nassau or Exuma