BASSETERRE, St Kitts – St Kitts and Nevis Labour Party (SKNLP) candidate for St Christopher 8, Dr Terrance Drew has accused prime minister Dr Timothy Harris and the area’s parliamentary representative, Eugene Hamilton “of hoodwinking the people” in relation to land(s) in the Brighton area, and subsequently, the sale of lands under the Lands for Debt Swap. 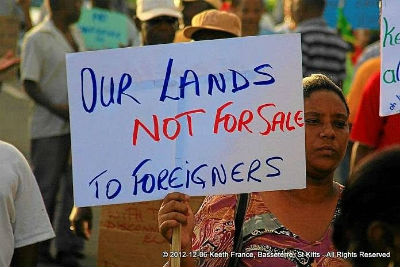 “Recently, one of the construction companies owned by a family member of prime minister Harris was observed clearing a large swath of land opposite the Windsor University School of Medicine, confirming that those lands have been sold by the Team Unity government to a Chinese investor and again raising the issue of nepotism,” SKNLP statement said.

In public statements leading up to the 2015 general election, the Team Unity candidates, while in opposition accused the incumbent St Kitts-Nevis Labour Party administration of “leaving no land for housing and locals and selling out all the lands from Conaree to Cayon and beyond to foreigners.”

Now, the minister for tourism and international trade, Lindsay Grant, is seen carrying a placard stating “Our Land is Our Birth Right” in a pre-2015 election demonstration.

Dr Drew pointed out that under the Land for Debt Swap, no land was ever sold by the Labour Party administration of then prime minister Dr Denzil L Douglas.

In October 2017, chairman of the SKNLP, Marcella Liburd informed the nation that prime minister Harris and his Team Unity government had gone back on an election campaign and manifesto promise, not to sell lands under the Land for Debt Swap to foreigners. 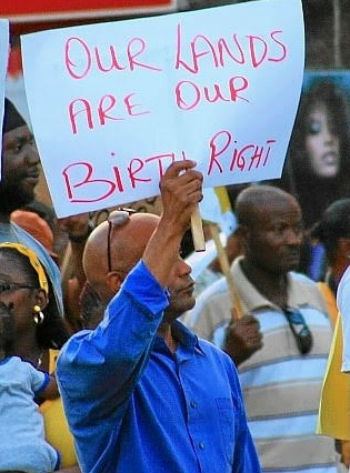 Liburd said at the time that lands in the Brighton to Ottley’s area have been taken away from a local farmer and his family who had been planting food crops for sale on the local market and for export for years.

In the October 2017 statement, Liburd, who is also the parliamentary representative for St Christopher 2 (Central Basseterre), accused Dr Harris of deception and called on him to “tell the public about the lands held by the National Bank under the Land for Debt Swap. We want Dr Harris to tell us, who they were sold to and how much money they were sold for.”

“We also want Dr Harris to tell us why after all these years the Vesting of Certain Lands Act that he said he was going to repeal has still not being repealed. This is another deception, another broken promise and another example of lack of trust, lack of transparency and lack of accountability,” Liburd said.