It’s lockdown time now because of the COVID-19 pandemic and many married people aren’t happy. 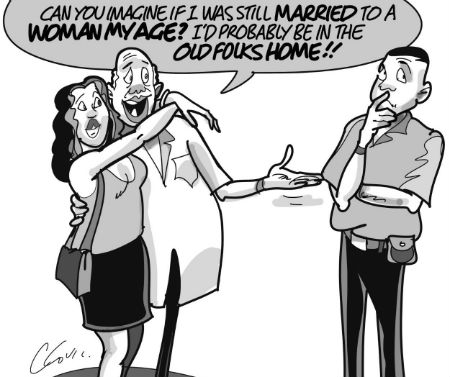 “cartoon-June 2020” It’s interesting - and perhaps a tad ironic - that marriage is called tying the knot.

Marriage is also referred to as wedlock. Notice the lock at the end. It’s called a union, attachment, commitment, pledge, betrothal, troth, ties that bind. All words of adhesion or confinement.

But amidst all this, there is also the pleasure side of marriage, or so many people wouldn’t keep on jumping into it. Interestingly, those who jump out of it often seem to feel a sense of liberation, a freedom from the ties that bind and are able to be themselves once again. At least some do, especially men, but women are not exempt.

It doesn’t matter what age either. I recently met up with an old friend of mine in the supermarket and had a most informative chat. I noticed that he was walking with an unusual gait, so I asked what was wrong. He explained that many years of doing sports, plus rigorous army life had taken its toll and left him with some joint problems.

But that didn’t stop him from enjoying physical activities. I asked him his age and he replied 78. He then said that life after marriage had really liberated him and he now has a girlfriend who’s 31.

The man is almost 80 and post-marriage. Yet he’s having the time of his life with young women.He was liberated from his padlock.

Based on my research, it seems as if marriage for many men is akin to some sort of padlock as, for some reason, they lose their freedom - real or imagined. They give up their friends and things that they used to do before. They get upstaged by things that the wife deems more important.

In contrast, women find marriage to be paradise, as they feel secure in a relationship. The man is always there to do her bidding, she feels protected, has her children in a safe environment and she can boast that she has a husband.

Experts have said that women actually do enjoy marriage more than men do. And it’s not that the men don’t love their wives, but they somehow feel muzzled, constrained, restrained, confined.

For this reason many men try to sneak out of the house every now and then, not necessarily to do wrong, but just for a few moments of liberation. That’s why they’re crying for bars to be reopened in this COVID time.

Some men feel obligated to keep their mouths shut after they get married, for anything they say will be met with a torrential tirade of turbulence.

Naturally there are women who live in the padlock of marriage too, but that’s usually from the actions of an abusive husband. That’s different.

What the polls show is that in many “happy” marriages, the women are in wedlock, but the men are in padlock.