Anderson Peters became Grenada’s lone medalist at the 2019 IAAF World Championships in Qatar when he won gold in the javelin. He talked with Caribbean Today’s Gordon Williams on Oct. 7, the day after his win, while on a flight to the United States where he attends school. The following is the interview edited for clarity and space: 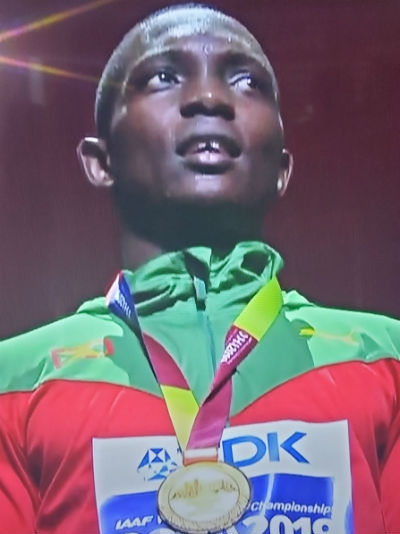 “Peters, Anderson” QUESTION: What’s the difference between being world champion today, and yesterday?

ANSWER: I guess people just look at you different. People just start paying attention to you more. Start, like, going back into your history to see, like, what you have done in the past to try and predict your future. That’s just the major difference.

Q: The recognition that you’re bringing to Grenada now, how important is that to you?

Q: You started out as a sprinter and you’ve idolized, for example, (Jamaica’s) Usain Bolt, but you turned to javelin … You are finding success. Any regrets looking back at it now?

A: Right now, no. I have no regrets at all. At first I was kinda upset when (the coach) told me to stop … because I really like sprinting. But as I got older I understand why he told me to stop sprinting. I immediately started to see the success in javelin …

Q: Can you say right now that you actually love the javelin?

Q: What do you think your success will have on your nation, Grenada … outside of sports?

A: It’s a great accomplishment for Grenada. This is only our second medal in the World Championships and right now we have two gold medals. Coming from nothing to having two gold medals, that’s a great achievement for my country. I think (Grenada) would put more effort into getting more athletes out into the U.S. on scholarships so that they exploit the facilities and the treatment so that they can become world class athletes.

Q: Do you think that, as a result of your success, the emphasis by U.S. college recruiters will shift more towards recruiting field event athletes, not just the finished product, but looking at the potential to develop finished athletes?

Q: How do you think winning for Grenada brands your country … how (others) view the Caribbean, the Caribbean athlete and Grenadian athlete?

A: Well, on the Caribbean on a whole, I think they’re gonna view us different, definitely, because not only has the Caribbean been dominating in the sprints, but if you look at the results from this World Championships and past meets, you realize that Caribbean athletes have been dominating in the field events as well.I mean, we’re basically taking over the sport and they’re always gonna be looking out for us …

Q: Any added pressure on yourself building up towards (the 2020 Olympics) and do you feel the weight of that responsibility?

A: I’m already thinking about trying to defend that (WCA) title … But I spoke to Kirani(James, Grenadian Olympic and WCA 400 meter gold medalist) and I asked him. I was like ‘which gold medal meant more to you or which one shows better?’ And he says to me ‘the Olympic’ … It just motivates me to try and get one myself.

Q: You go to college in the U.S. Do you … think that you carry a bigger weight now, especially since you’re going back to school?

A: Being a world champion, man, that’s something only a few people can say … I think people (in the U.S.) will definitely look at you different … They would appreciate you more, give you more recognition.

Q: As world champion, do you see yourself taking on an additional role … speaking not just about Grenada, while you’re in the U.S., but speaking to Grenadians about hard work and success, what they need to do?

Q: Are you ready for the responsibility to be an ambassador for your country?

A: I don’t think anybody can prepare well enough for that. That’s something you just have to adapt to and then you just have to live with … For me, (winning at WCA) just comes with a lot of responsibility. You just gotta be careful with everything you do right now.

Q: Is it weighing heavily on your mind whether to turn professional or not, finish school?

A: I’m thinking about it, but I’m not just going in hard at it right now. I’m just gonna let it play itself out… I’m not gonna like pressure myself to say ‘I need a contract now or I need to go pro now’. I just need to go to school and let it like work itself out.

Q: Do you think you made a nation happy?

Q: At what point this did you start to feel you could compete and beat the world’s best?

Anderson Peters, 22, is in his first semester as a junior at Mississippi State University, where he is majoring in business administration.