Boys Will be Boys, But that Sometimes Spells Trouble 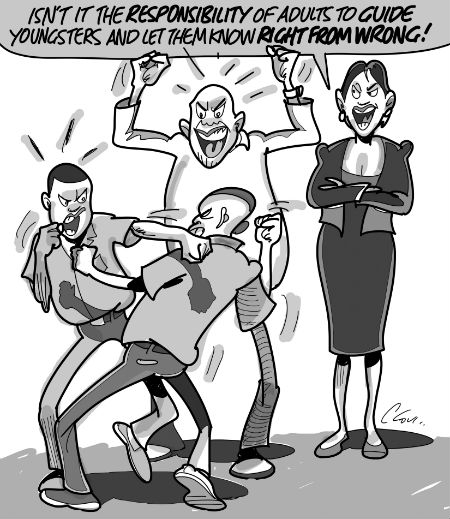 “CARTOON-Oct. 2019” No wonder many people shake their heads and justify the behavior of boys. “Oh, boys will be boys,” or in Jamaican parlance, “A suh bwoy pickney stay.”

Listen, not even some dogs like it when young boys walk by their yard and will growl and bark at them. All because many young boys love to harass and stone dogs.

Boys have always been a handful, not only to their parents, but to society. In any school situation, it’s the boys who mostly get into scuffles, fights, altercations and general mayhem.

Well, the girls seem to be catching up, but it’s still the boys who hold sway when it comes to troublemaking. In the same way that girls outnumber boys in the educational stream, the boys outnumber the girls in the troubled stream.

As a result, boys constantly need supervision and guidance. This applies even in the animal kingdom. Years ago I saw this documentary on National Geographic about this group of adolescent male elephants that were bad to the bone. They ran amok in the jungle, uprooting trees and attacking other animals without provocation. They were out of control.

So what did the game wardens do?

They introduced a few adult male elephants into the area and instantly the teenage rebel elephants quit their un-elephant-like behavior and settled down. The mere presence of adult males was enough to put the fear of elephant god into the upstarts. They showed respect and toed the line.

Now, if even elephants can do that, what about humans?

Many adults placed in authority are failing our boys and then we wonder why they turn out the way that they do.

When a former head boy of a prominent high school recently spoke passionately about the breakdown of discipline, he was accused of holding a grudge against the institution. No one wanted to hear what he was saying.

I remember my days at school, teachers were respected, adored even, and no one even thought about back-chatting or abusing them. I heard a respected past student of a high school state that back in his day, if a student even gave a teacher a dirty look, he would be disciplined.

What I see now hurts my heart. I was a boy once and we all did boyish things, but we feared the consequences of our actions. It is the responsibility of adults to guide youngsters and let them know right from wrong.

We all have chanted and said nasty stuff about each other, describing genital size and other body parts. But we did it out of earshot of adults. Not so nowadays, as boys say and do anything, even before teachers.

I do not solely blame the boys, but put the onus squarely on the shoulders of the adults who should have guided them better.

Boys will be boys, yes, and boys will always push the envelope. But no boy should show disrespect to adults and made to feel that he is above consequences.

For every action there should be a reaction. Our boys spell trouble.