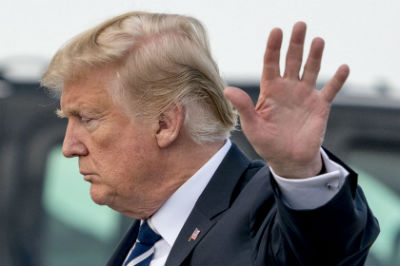 “Since he launched his improbable but ludicrously successful foray into presidential politics, Trump has sold himself, in part, as a wildly successful businessman whose perspicacity about money making would serve him well in making deals on behalf of the United States and the American people. Trump sat atop a business empire, with properties around the world claiming to be a billionaire and refusing to release tax returns that could either confirm or expose his big talk as much nonsense,” says Damon Linker, reporter of the Week.

When it came to President Trump and his businesses no one knew what to believe. Everyone in the country is well aware that the President had filed bankruptcy during many different periods in his life and maybe too many times to count. But somehow he always came out on top, and he still bragged about being a billionaire.

Thanks to the New York Times, after reviewing President Donald Trump’s tax returns from 1985 to 1994, it has been discovered that year after year he appears to have lost more money than nearly any other individual American taxpayer.

This is an amazing achievement considering everyone thought the President  was making billions, and telling everyone in the country how they could be successful like him. “You heard that right: Of all the tens of millions of taxpayers in America during those nine years, the man who a little more than two decades later would go onto to become the 45th president of the United States was quite possibly the country’s biggest loser. Which, given his 2016 election pitch, has to made him one of America’s all-time greatest con men as well,” explains Damon Linker.

On the other hand, White American voters are some of the most racist and closed minded individuals on the planet in relation to President Donald Trump. Once the president decided he could fool White Americans that he could make America White again, he had a winning formula.

“His supporters just don’t care. He’s been metaphorically shooting people on Fifth Ave. for years now and getting away with it. And it really isn’t clear what, if anything could alter this reality,” says reporter Damon Linker.

After the release of the Special Counsel Robert Mueller’s report, it clearly demonstrated in detail that members of the campaign tried to get help from the Russians. Many of the Trump supporters don’t appear to care nor do they want to hear about it.

This report also demonstrated numerous acts of criminality, and more examples of unethical behavior, and still the president has hit a six-month high in his approval rating.

Ninety percent of the Republican Party and half of the independents across the country approve of Trump’s job performance. It does not matter what Trump says nor does, White folks only believe that the president can make America White again.

Racism has raised its ugly head with no apologies and it is pervasive and blatant. The responsibility of all Americans is to uproot this sickness and disease, and call it out on all levels of human activity.