ATLANTA - As the U.S. Virgin Islands announces the return of hotels and resorts to the accommodations landscape over the next few months, the leader of the U.S. Territory committed his government to securing increased airlift to fill those rooms. 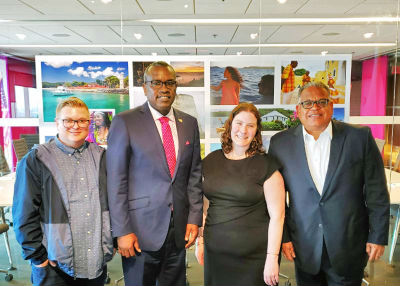 Speaking after a successful meeting with Delta Air Lines' leadership team in Atlanta on Thursday, Governor Albert Bryan Jr. said a strong aerial highway policy was critically important to the Territory's future, and his administration was exploring every avenue to boost relations with airline partners.

"We have been meeting and talking with airline officials since we took office, and this session here in Atlanta was no different - getting important feedback on the performance of routes into St. Croix and St. Thomas and giving our partners at Delta an update on our tourism rebound and recovery," said Governor Bryan.

Governor Bryan, who was accompanied by Tourism Commissioner nominee Joseph Boschulte, reported that Delta was generally satisfied with the performance of its routes into both of the Territory's airports, and committed his teams at both the Department of Tourism and the Virgin Islands Port Authority to identify opportunities for capacity increases with the airline.

"It was encouraging to hear how confident Delta's team is about our product, and that they are keen to work with us to bolster Atlanta-St. Croix flights to pre-storm levels, when we were experiencing an uptick in demand to the 'Big Island'," the Governor stated.

"The St. Croix airport has been underutilized for years, so we are looking forward to exploring new ways to put people into seats to St. Croix," said Governor Bryan, explaining that with Divi Carina Bay Resort expected to come back online later this year, with the expansion in sharing accommodations, and robust business travel demand returning with the resumption of activity at the oil refinery, the conditions looked favorable for increasing flights to St. Croix.

The governor said the airline was encouraged by a very strong uptick in traffic to St. Croix this past March and was satisfied with the performance of its routes from Atlanta and New York to St. Thomas. 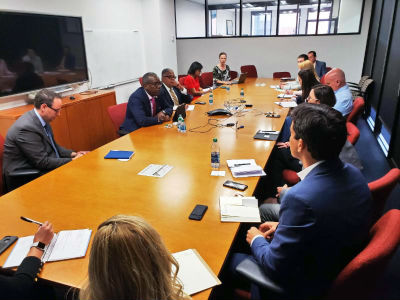 Governor Bryan told the airline executives that legislation would soon be introduced to attract investors to new hotel and resort projects across the Territory.

He will brief the investment community on the administration's business-friendly approach to hotel development at the Caribbean Hotel & Resort Investment Summit (CHRIS) in Miami next week.

While in Atlanta, the governor and commissioner nominee also met the Department of Tourism's advertising agency of record, J. Walter Thompson Atlanta, where they explored the importance of leveraging data to differentiate audiences and improve storytelling.